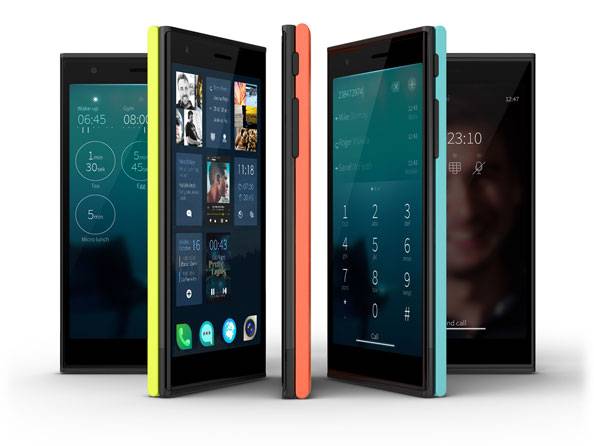 Smartphone users in Finland will soon have a new device to choose from once Jolla, a company born from Nokia‘s abandoned projects and employees, releases its first smartphone in two weeks’ time. While the device runs its own mobile platform, called Sailfish OS, it might be interesting even to Android users on both a hardware and software perspective.

The Jolla phone is somewhat based on the Nokia N9 but adds, almost literally, a new layer. While the phone itself comes in a plain black color, it features what Jolla calls the “Other Half”, an interchangeable backplate almost the same thickness as the phone. What makes this particularly curious is that the backplate can be used to transfer data or control the device via NFC. Different backplates can be configured to automatically change the phone’s color theme and wallpaper upon attaching, making it possible, for example, for studios or artists to sell backplates that contain their music as well as album art and color schemes. As far as the other specs go, the Jolla smartphone is, unfortunately, rather mediocre.

On the software side, Sailfish OS can run Android apps directly via a compatibility layer. Just yesterday, Jolla announced a partnership with Russian Internet giant Yandex to provide thousands of Android apps via the Yandex.Store. Jolla is definitely not unique in doing this. Even BlackBerry has some amount of support for running Android apps on its BlackBerry 10 OS. It even teased yesterday the upcoming improvements to its Android Runtime once BlackBerry OS 10.2.1 rolls out. With the enormous amount of Android apps already in existence compared with native BlackBerry 10 apps, let alone Sailfish OS apps, it is quite possible that Android apps might overtake or even make obsolete the native apps on these platforms.

The Jolla smartphone will be available from the Finnnish carrier DNA for a price of 399 euros, roughly $540, so it’s not exactly cheap. Fans outside of Finland might have to wait a while though, as Jolla has not indicated whether it plans to make the smartphone directly available in international markets.