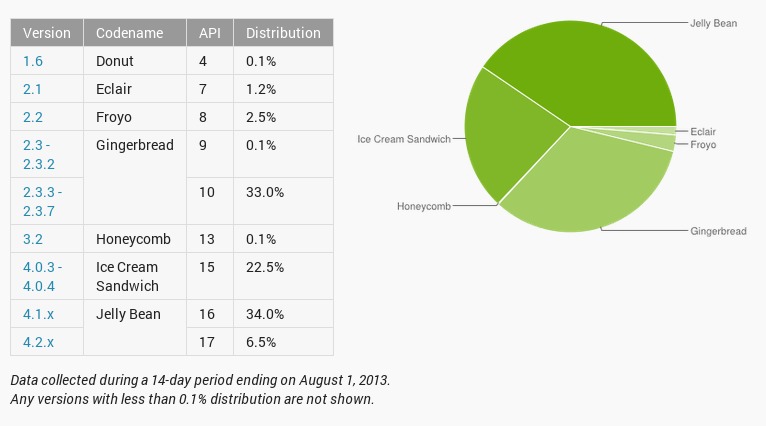 Slowly but surely, Gingerbread’s days as the top honcho of Android distribution are being numbered. Taking its place is Jelly Bean, which now comprises 40% of the total Android distribution as of August 1 this year. Not far behind is Ice Cream Sandwich, which is enjoying a good 23% of the pie.

When Gingerbread came out, it easily became the most popular version of Android. It became so popular that manufacturers started putting it on devices that Google didn’t initially design it for, namely, tablets. The popularity of Android on tablets, as well as Gingerbread’s paltry performance on such devices, led Google to hurriedly release Honeycomb. It then immediately released Ice Cream Sandwich to correct Honeycomb’s many mistakes. But even then Gingerbread still ruled the Android valley.

Last June, we already saw the trend, with Gingerbread slowly dropping in favor of Jelly Bean. Since then, Jelly Bean consistently risen to the top, from June’s 33% to August’s 40%. Gingerbread isn’t disappearing any time soon, with a 33% foothold in the market. But with the announcement of Android 4.3, another Jelly Bean release, we might see even more changes as Nexus devices and recently released flagships, like the Moto X, are upgraded to this version.

There are some caveats to Google’s data, however. The data that is collected only comes from units whenever a user visits the Google Play Store, whereas previously it was collected whenever the device connects to Google servers. Although Google claims that this paints a more accurate picture of users who are actively engaging in the Android ecosystem, it does leave out hundreds if not thousands of devices, many of them cheap phones or tablets, that either do not regularly connect to Google Play or do not even have Google Play.