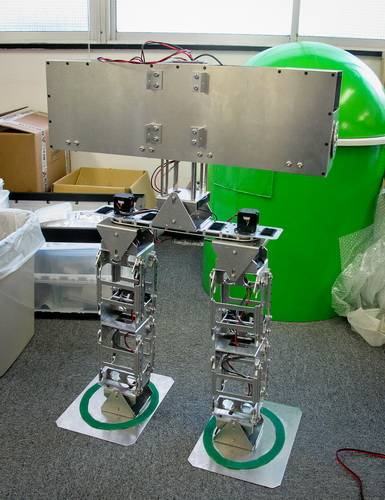 Raaah! This is just fantastic, and it’s exactly what the next step should be after the cooler came out a few days ago. Apparently there are these two Japanese companies who have teamed up to create not only a several-foot-tall Android (in the shape of the Google Android, of course,) but they’ve got it controlled by an Android OS. This robot goes by the name RIC Android and it’s hardware is built by RT Corporation while its software is developed by Brilliant Service.

This Android weighs approximately 31 lbs (14 kg), and is just under 4 ft tall (120 cm). When it has its mouth open, it ends up being closer to 5′3″ (130 cm.) Also when it has its mouth open, it reveals it’s on-board controller, this controller able to move the head, arms, and 10 points of articulation in its hips and legs so it’s able to walk on flat and uneven ground!

This amazing green monster is part of a larger project that the two companies have envisioned where Android will be part of our everyday lives. This robot could, they say, for example, be in a classroom where a teacher could not be, keeping an eye on the students, following them around all day. Creepy! Another idea they have is along the lines of “Life Blogging” which include the recording of memories from the whole family’s everyday life – photos, videos, audio tracks, everything would be captured and replayed on request. See an extensive cache of information on the development of this project over on Robots Dreams and take a peek at the videos of this Android walking around on Google Developer Day in Tokyo!

ALSO: We’re not sure what version of Android they’ve built this project off of, but it does appear that they are using an HTC G1 phone in one of the developer photos (in the gallery below.)