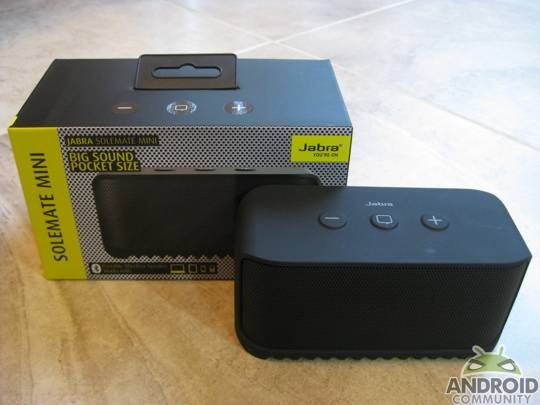 Jabra touts the Solemate Mini as a speaker that is “pocket size” and able to offer “big sound.” As far as the size goes, the Solemate Mini measures in at 4.92 (L) x 2.08 (W) x 2.36 (D) inches. The speaker then weighs 10.4 ounces. Jabra has this connecting with a Bluetooth 3.0 connection, though the initial pairing can be done using NFC (Near Field Communication) if you have a compatible device.

Regardless of the path you take for setup, the process is quick and easy. It took us roughly 60 seconds to go from having the Solemate Mini in the box to streaming music from a smartphone. Along with listening to music, the speaker is also setup to use to be used for voice calls.

To that point, the top of the speaker has three buttons — one to answer or end a call, one for volume up and one for volume down. The center answer/end button also tells the battery status. You can tap the answer/end button (when not on an active call) to hear the battery status. In addition, pressing and holding the volume up and down buttons (for 1 second) will mute and/or unmute the microphone. 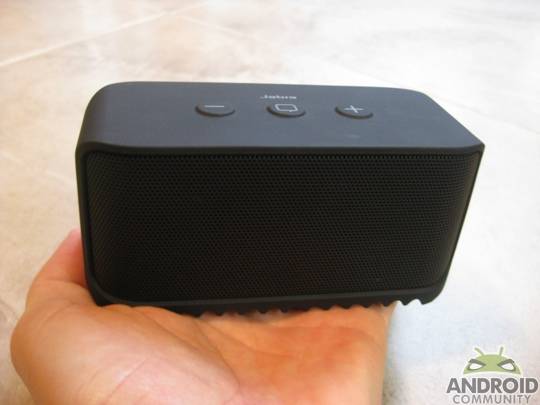 As far as the battery goes, Jabra has said the Solemate Mini will fully charge in about 3 hours and have enough juice to last for up to 8 hours. In our experience, that is pretty spot on. Looking at the rest of the speaker and we find a power button, headphone jack and microUSB on one side. The front has two speakers and the bottom has a spot to keep a 3.5mm cable, just in case your device doesn’t have Bluetooth.

Sticking with the tour of the speaker, the overall design is rugged. Jabra mentioned it is sweat, dust and splash resistant. We wouldn’t suggest throwing the Solemate Mini in a big pile of dirt or mud, and we wouldn’t suggest carrying it around in the rain — but on the flip side, it does have a solid feel. We’ve used this in the shower and out doing some yard work where sweat was involved and neither brought any problems.

Perhaps most important here — the sound quality. We listened to a variety of audio including different styles of music, some audiobooks from Audible and even some podcasts. Overall, the speaker was able to pump out quality sound. The audio was clear and full sounding. In fact, we surprised a few household guests when they showed up for Christmas dinner — they were surprised the music coming from that “really small” [their words] speaker sitting on the counter sounded “that good” [again, their words]. Needless to say, we do have to agree with those words.

We mentioned we had been using the regular sized Solemate, and to offer some comparison in terms of weight and measurement. The original Solemate weighs in at 21.5 ounces and measures in at 6.77 (L) x 2.52 (W) x 2.75 (D) inches. We listed the Solemate Mini weight and measurements above, and while there is a big difference, we aren’t sure we would let that fully influence your purchase decision. Both speakers bring quality sound and both offer many of the same features.

We sort of feel the original Solemate size was a bit better for our usage needs, but that is more a personal decision. We used this mostly around the house and therefor weren’t as concerned with needing to pack and/or carry it. If you are the type looking to take this out and about, and need to save precious bag space — the Solemate Mini will likely be the better option. Aside from the difference in size, there is also a difference in price. The Solemate line is available with Jabra as well as with several retailers. Using Amazon pricing as an example, the Solemate Mini is currently priced at $83.80 and the original Solemate is currently priced at $139.04.

Anyway, that having been said, the gallery sitting above should give a clear picture of the size difference between the two speakers. And sitting below are a few additional shots of the Solemate Mini including some that show the packaging and how the 3.5mm cable tucks neatly into the bottom of the speaker. Lastly, while the review unit Jabra sent us was black, the Solemate Mini is available in a variety of colors to include blue, red and yellow.