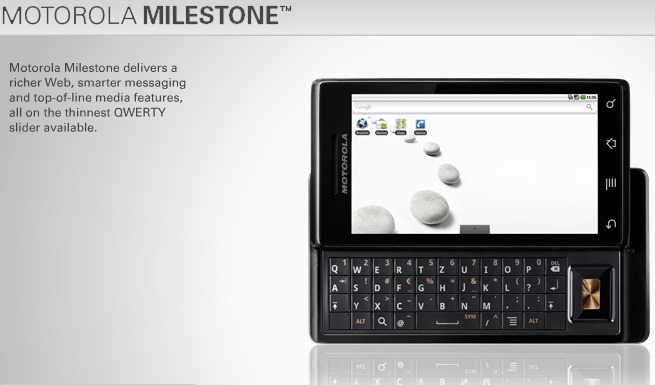 Okay, so November seems to be the Android month of the year, Motorola Europe have officially announced the Motorola MILESTONE. Which is the GSM version of the Verizon DROID, and will also run Android 2.0. The MILESTONE has been confirmed for Germany and Italy on at least two carriers; Vodafone and O2, according to Motorola Germany.

Now, the Motorola sites are mum on release date or pricing for the MILESTONE, but the latest rumors have the release date for November 9th. Also, the new Moto device will be priced at €404.20 ($595) before taxes for business customers, according to those rumors. The Motorola MILESTONE has support for 900/2100 UMTS/WCDMA and quadband GSM, but other than that, the hardware specs seem to be identical to the Verizon DROID.

Now, as we all know by now, the DROID will go on sale by the end of this week, Friday, to be exact. The MILESTONE by Motorola will ship with the MOTONAV software, which offers 3D Landmarks and a trial version – yes, unfortunately just trial version – of EASY SEARCH, LANE GUIDANCE and POINTS OF INTEREST. But hey, it will have something the DROID doesn’t have; Multitouch.