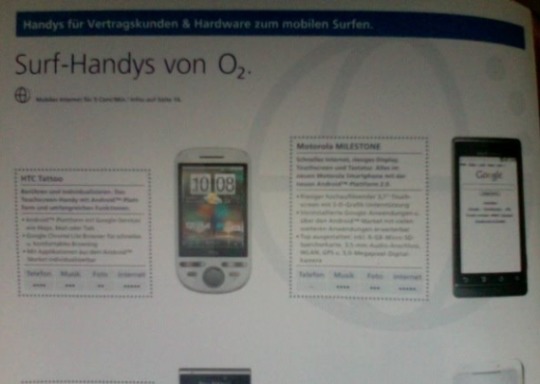 While here in the US, Verizon is having a blast with their Motorola DROID pre-release, across the pond, in Germany, people are also getting excited about the same Motorola device, but in Europe, it will be called the MILESTONE. So far, there is no word whether the Motorola MILESTONE is an exclusive to O2 in general, or just in Germany. And nobody is saying if it will be available on other carriers.

O2 will have the MILESTONE in Germany, but that’s not all the good news for our cousins from Europe. The thing is, apparently, the GSM version of the Motorola DROID, will have multitouch support in Android 2.0. Now why would the MILESTONE have multitouch capabilities and the CDMA version – the Verizon DROID – won’t is a mystery.

Mobile-Review’s Eldar Murtazin has posted a video of the Motorola MILESTONE in action – check it out below. If you pay attention to the video, you’ll notice that it doesn’t appear to have that function added or modified by Eldar. Maybe it was a decision made by Motorola? Well, anyway, according to the leaks, the handset will arrive on O2 Germany as soon as November 9th.