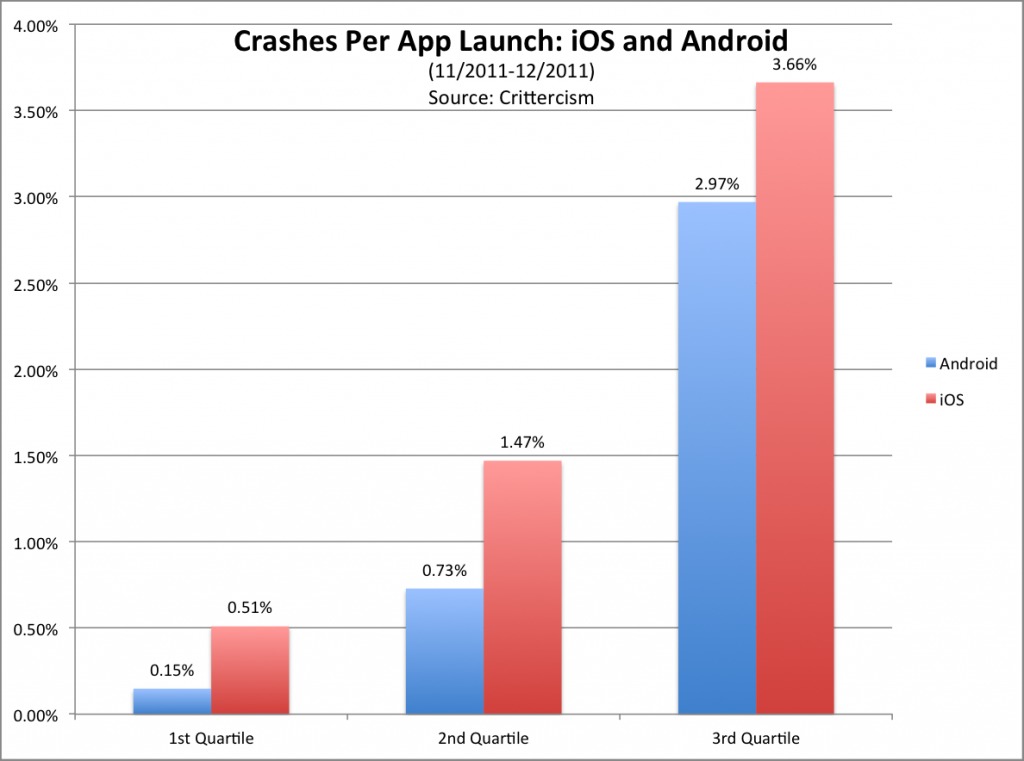 “Oh, I’d never use an Android phone – those things crash too much!” This mantra is often heard from those cradling their iDevices, basking in the self-satisfied glow of the latest incrementally updated iPhone Designed by Apple in California (and Made by Foxconn in China). But is it true? Recent research from mobile analytics firm Crittercism says no. Based on data collected in November and December of last year, iOS apps crashed at a significantly higher rate than Android apps – more than three times as much for top selling apps. Don’t panic, Apple faithful, just keep repeating this soothing chant to yourself: “It just works.”

The research was normalized for both platforms, taking relative downloads out of the equation. Even in the most extreme example, less than 4% of iOS apps and 3% of Android apps crashed with regularity. The biggest OS version offender by  far was iOS 5, making up more than a quarter of app crashes all by itself. That makes sense, since new operating systems have the most compatibility issues with older apps – at least until you read that Android 4.0 has just 1% of the share of crashed apps. Apple’s combined mobile OS made up more than two thirds of total normalized app crashes. The biggest portion of Android crashes went to Gingerbread 2.3.3, with just under 4%.

Looking at Android specifically, Gingerbread makes up more than half of crashed apps across all versions – which makes since, considering that it’s at roughly 60% penetration across all Android devices at the moment. Android 4.0 Ice Cream Sandwich does show a disproportionate amount of app crashes, with just under 7% of the Android total. When taken across both mobile platforms, iOS still has the majority of crashing apps, even considering its greater share of total app downloads.