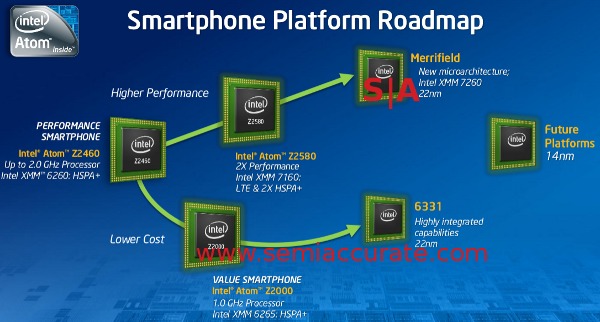 This year Intel kicked off their major attempt into the smartphone market with the release of their Medfield Atom processor for smartphones. We’ve covered it plenty in the past and their first retail phone the Lava XOLO we got some hands-on with last week. While their first Android smartphone is decent, it’s not up to par with the newer dual-core and quad-core processors we’ve been seeing. Their latest leaked roadmap however shows us their plans.

Intel’s current Medfield smartphone CPU is a 1.6 GHz single-core Atom processor but they have plans to release a much more powerful dual-core offering over 2x the performance with 4G LTE and more HSPA+ support soon. The leaked slide above found by Semiaccurate.com shows not only that, but also their 2013 smartphone plans with their new Merrifield processor. Qualcomm’s just released S4 Krait processor is extremely impressive and runs on a small, efficient 28nm processor fabrication, but Intel’s new Merrifield will be even smaller at 22nm.

According to the leaked roadmap it looks like as 2012 continues we’ll be seeing more Medfield phones from Intel, as well as multiple budget-friendly smartphones with lower specs to compete in that category. Then as the year comes to an end we can expect to see more than double the performance of their already impressive processor, with 4G LTE support and even more in early 2013. Intel’s already announced Lenovo and Motorola as launch partners, and we should see their Intel-powered Android phones arrive later this year. The leaked roadmap doesn’t reveal dates but semiaccurate has been right in the past with their details. Hopefully we see more from Intel soon.