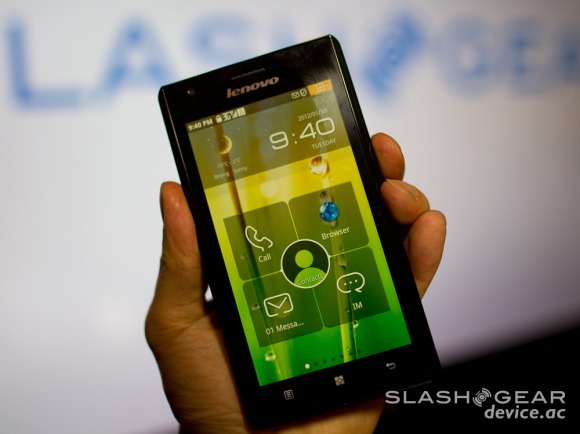 When you look for an Android phone (and increasingly, any smartphone or tablet) you’re looking for something with an ARM-based processor, because at the moment it’s the only game in town. But that may change very soon: during Intel’s quarterly financial report, CEO Paul Otellini told investors that the first phone to feature Intel’s Medfield architecture will launch by the end of the week. That’s news to us, and it was certainly news to those listening in on the call.

The first current-generation phone to feature an Intel processor was Lenovo’s K800, also known as the Racer-A. We got an exclusive look at the phone at CES in January. Otellini didn’t specify which phone would be coming so soon, but since the K800 is the only one shown to the public this far and its rumored release date is May, it seems like the safe bet. On the other hand, Intel has also partnered with Motorola for its first round of hardware. Motorola hasn’t shown off any actual handsets just yet, but it’s not beyond the realm of possibility that they’ve kept it under wraps… just very unlikely. And Motorola is better positioned to sell phones outside of China and Europe.

Either way, you shouldn’t take the CEO’s statement to mean that a Medfield phone will be sitting at your local retailer by Sunday. With the 4.5-inch K800 already rumored for May, the most likely scenario is that Lenovo plans a formal announcement soon. These things have a tendency to get side-tracked as well, so I wouldn’t be entirely surprised to see the next few days pass without a peep from either company. We’ll just have to wait and see.