Instagram sent out invitations to members of the press recently, inviting them to “share a moment” with the team. The invitations, which came with a block of wood covered in an Instagram photo, note that the event is at 10am on Decemer 12th in Manhattan. The block of wood also has a slit in the back, which seems to be for hanging on a wall.

Instagram recently added advertisements to the fold, which came shortly after a $1 billion purchase from Facebook. There are also rumors that Instagram has been planning to add a messaging service to the mix, which we speculated was the reason for a recent departure form their management team. Facebook is said to have made a $3 billion offer for Snapchat, which we believe could have been rolled into Instagram. Snapchat then hired away Instagram’s Director of Business Operations, naming her COO.

The invitation itself hints at something else, though. It could signal a printing and shipment service for Instagram, even mounting the pictures creatively in the process. Though interesting, it seems a far cry from, well, useful. We like digital photo storage, and capturing memories is often done via mobile. Home printers are also in a space where photo printing is easily accomplished, and mounting a photo just takes a little elbow grease. 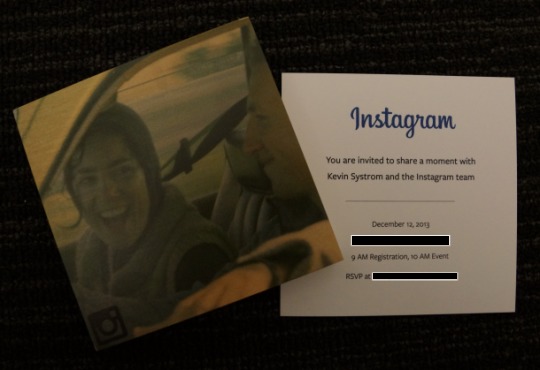 Then again, Instagram may have just bee trying to be kitsch and fun, which we applaud. An Instagram spokesperson declined comment to CNET, so we are left with nothing other than speculation on what’s in store. Messaging would be nice, but it could be anything. Direct photo sharing, maybe?