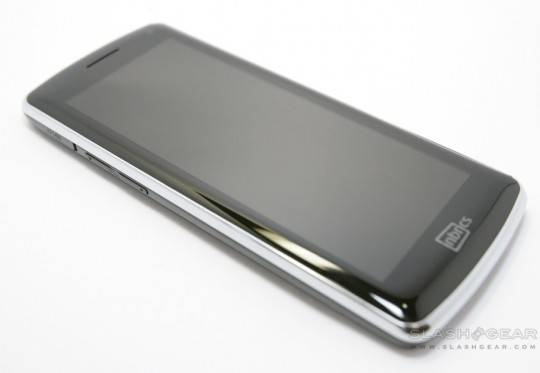 As they promised back in November, Inbrics has unveiled their MID M1 running Google’s free mobile OS. After the November video, many were in doubt about this device, but apparently, those people were wrong. The Inbrics MID M1 Android-powered smartphone was at CES proving is not a fake.

This Android-powered device comes with an AMOLED touchscreen, which slides aside to reveal a QWERTY keyboard. There’s also an ARM Cortex A8 processor, a choice of 3G or WiMAX connectivity, WiFi, GPS, Bluetooth and 16GB of onboard storage, and for those who need more storage, there’s a microSD card slot.

Inbrics are also working on a way to integrate their new Android device into our digital media lives, via Convergence One or “3 Screen Plus”. This concept makes the MID M1 to act as a central controller for your media, allowing you to push said media between TVs, cellphones, computers and other devices.

LAS VEGAS, NV – January 7, 2010 –Inbrics, a leader in media convergence solutions, will today unveil the MID M1 for the first time ever at International CES, 2010. The MID M1 is an Android-powered smartphone with Wi-Fi 802.11 and an AMOLED touch screen that slides to reveal a full QWERTY keyboard. Other features include GPS, Bluetooth, 3G or WiMAX, a 3-megapixel camera on the back, a VGA camera on the front, 16GB of internal memory and a MicroSD card slot.

Using human-centric technologies, Inbrics is driving the commercialization of the open-source Android platform within an entire ecosystem of connected software and devices including the MID M1, PC, IPTV, Server, and media network, leveraging IP-based devices such as: DMB, VoIP / SoIP, and WiBro / WiMax.

“We believe that the future will dictate seamless single device applications for the consumer, which is why we are committed to the media convergence space,” said Bobby Cha, chief marketing officer at Inbrics. “Our goal was to create a more intuitive experience that every consumer could benefit from.”

The Convergence One or “3 Screen Plus” Android platform makes it easy for consumers to access and share their digital photos, music, movies and more from any device in their home and outside wireless networks.

Today there is a constant need for data to be pushed to a number of devices at a rapid pace, yet devices cannot talk to each other to streamline the process of sharing and accessing that data. A consumer may have one or more of the following: a TV, a mobile phone, a digital camera, a laptop, a desktop and a DVR. The Inbrics convergence ‘controller’ acts as a conduit so the data can be pushed to any device the consumer chooses.

Inbrics currently has partnerships with global carriers and manufacturers including T-Mobile, SK Telecom, Korea Telecom, China Mobile, China Unicom, Celcom, Samsung, LG, and Kyocera. The company plans to introduce the MID M1 in the U.S. through cable companies and both fixed and wireless carriers. It will be available in the U.S. in 2010 or early 2011.

About Inbrics
Inbrics is a media convergence solution and device provider facilitating 3 screen services including Convergence Network Solutions, 3-Screen SW Platforms, Multimedia Solutions, Embedded S/W, and IP-based devices, such as DMB, VoIP/SoIP, WiBro/WiMax, and MID devices. Since its inception in 2006, Inbrics has developed partnerships with global carriers and manufacturers helping the company to become a leader in the Korean media convergence marketplace and accelerate international expansion in the Americas, Europe, Asia, etc. Inbrics is a subsidiary of Insprit, a mobile convergence solutions provider, publically traded on the KOSDAQ exchange in Korea. For more information, visit www.inbrics.comor watch our video ad on YouTube.