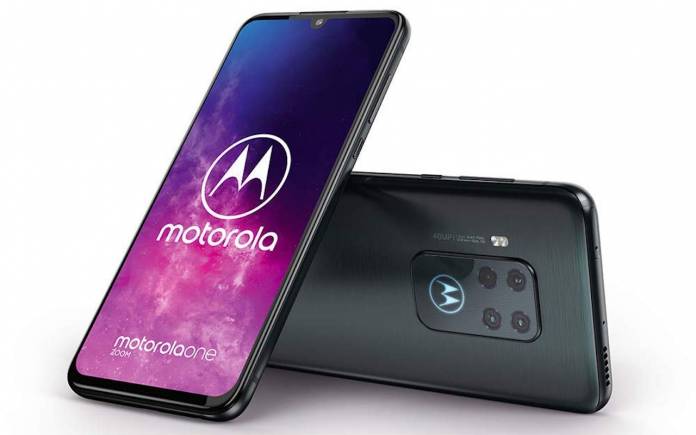 This is the Motorola One Zoom. Okay, so there is no official confirmation or announcement yet but our source is Roland Quandt. We’ve actually seen this before but the latest post just tells us the truth is about to be uncovered. The Motorola One Zoom is said to come with a special light-up Motorola logo at the back. The phone will have a 48MP quad-camera system so there is a possibility it can be a premium phone. Alexa is also said to be part of the device so there is a big chance it won’t run on Android One.

The Motorola One Zoom is no stranger to us. It still is in the works and we’ve been saying it will boast a 48MP quad-cam dual OIS setup on the rear that protrudes. The main sensor is obviously the 48MP shooter but no information on the other three yet are available.

We’re guessing there will be a depth camera, wide-angle lens, and maybe a 5x zoom camera. A hybrid zoom camera that offers lossless magnification is also a possibility. Add a pair of optical image stabilizers (OIS) to complete the camera system.

When it comes to specs, the Motorola One Zoom is said to come with a 6.2-inch AMOLED display, FHD+ resolution, under-display fingerprint scanner, a small notch, 3.5mm headphone jack, loudspeaker, and a USB Type-C port. Pricing may be around $480 (€429).

This Motorola One Zoom could be mid-range to premium because of the specs and features. The major components that will determine what category it belongs to are the RAM and the mobile processor. We’re looking at maybe 6GB or 8GB of RAM and an unknown Qualcomm Snapdragon processor.