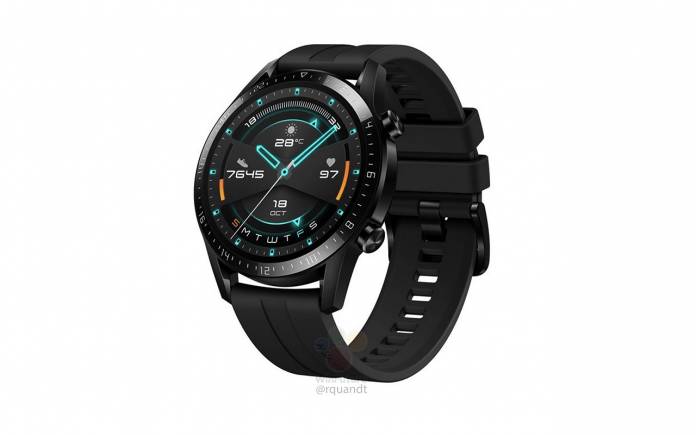 The first Huawei Watch was introduced in 2015 and we soon saw different variants. The latest we featured was the Huawei Watch GT Active and Elegant editions. They were announced earlier in March. In the coming weeks, we’re expecting the Huawei Watch GT 2 will arrive as per recent leaks. It’s an upgraded version of the Huawei Watch GT that was released last year. Images of the upcoming smartwatch codenamed ‘Latona’ appeared online. The watch with model number LTN-B19 is arriving soon as the next-gen Huawei Watch running on the top Chinese OEM’s own OS.

The Huawei Watch GT 2 will come in a more compact form and design. The edge of the watch isn’t smaller but looks a bit thinner. The display appears larger.

No information on the specs and features have been provided yet but we’re assuming the watch will be an upgraded version of the Huawei Watch GT Active. It will probably have a slightly bigger AMOLED HD screen, 390 x 390 pixel resolution or better, ceramic bezels, one-week battery, plus the usual health tracking features from Huawei like AI algorithms, TruSleep 2.0 scientific sleep tracking, and TruSeen 3.0 heart rate monitoring among others.

The Huawei Watch GT 2 will be powered by a 445mAh battery. It will also come with an integrated mic and speaker, GPS module, and Bluetooth. LTE connectivity can be an option. Choose between the Sport version with a plastic strap and the Classic version with a leather strap.

Huawei Watch GT 2 is also expected to include an optical heart rate monitor. It can be used to check on you during different kinds of exercises whether you’re running, swimming, or cycling. We’ll get to confirm all leaked information on specs at the upcoming IFA 2019 in Berlin. The watch may probably be introduced together with the new Huawei Mate 30 and Mate 30 Pro.