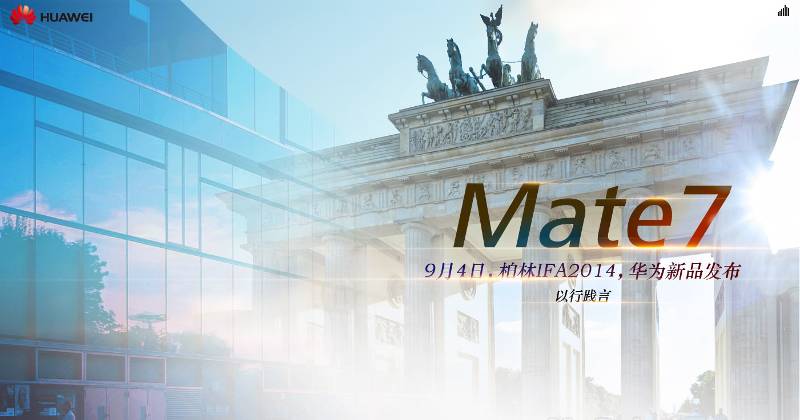 Huawei is jumping over numbers again. While the jump from Honor 3 to Honor 6 was believed to be motivated by the upcoming Apple iPhone 6 and next year’s Samsung Galaxy S6, going from Ascend Mate 2 right to Ascend Mate7 is a bit more perplexing. Whatever the Chinese OEM’s reasons may be, the Huawei Ascend Mate7 is coming next month at IFA 2014 in Berlin.

Leaked information about Huawei’s next big, figuratively and literally, smartphone is a bit sparse but quite consolidated. They revolve around two variants, with one believed to sport a 2K resolution screen with 3 GB of RAM, while the other only has a 1080p display and 2 GB of RAM, both coming at 6 inches. Both variants will also be powered by the new Kirin 920 which Huawei flaunted inside the Honor 6 last June. There is believed to be a 13 megapixel camera at the back and 5 megapixels on the front.

The Ascend Mate7 might be interesting not in itself but by how much it might resemble some other high-end, and more expensive, smartphones. Previously leaked photos betray a design, specially with the rear cover, that looks eerily similar to HTC‘s finest. There is even talk of a fingerprint scanner on the back, similar to the HTC One Max. While that sensor seems to be mostly confirmed as coming, its placement is still uncertain.

The smartphone will also mark the debut of Emotion UI 3.0, the next major version of Huawei’s custom Android experience. Like MIUI 6, which Xiaomi just announced earlier, Emotion UI, or EMUI for short, is switching to a flatter and more minimal look. Unlike MIUI, however, EMUI leans more towards the Android side of the spectrum, making the user interface uniquely Huawei’s but still undoubtedly Android. Expect to see and hear more about Huawei’s new baby come September 4, when the OEM unveils its latest products amidst the throng of competitors doing likewise.