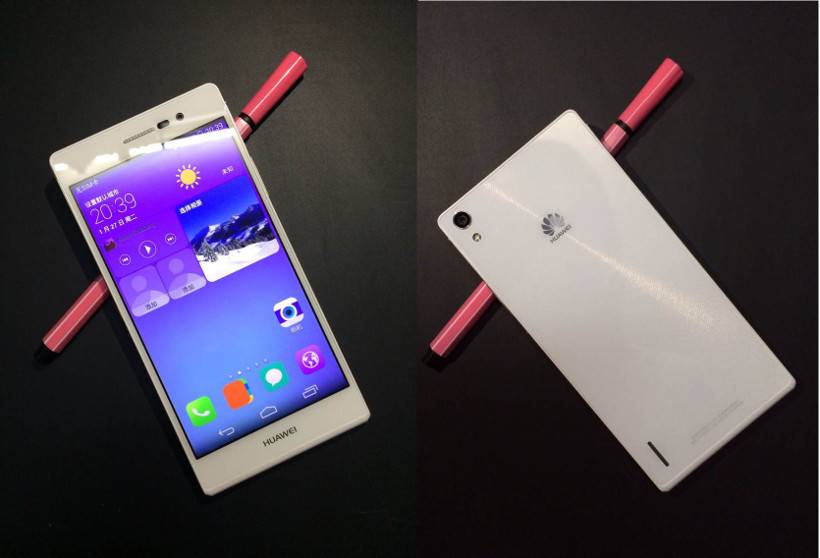 Huawei may have somewhat taken a backseat the past month or so, but now it’s prepping for its next big reveal, with the Chinese manufacturer teasing its Paris media event. Meanwhile, the Huawei Ascend P7 is already showing up in non-blurry leaked photos ahead of the scheduled announcement.

This new batch of photos reveal the Ascend P7 in all its entirety. Or at least the physical form it will take. The design pretty much matches what we’ve seen in the TENAA certification for the device, except perhaps for the long slot at the bottom, apparently for the speakers, which was admittedly not that obvious from the earlier photos due to the black color and blurry quality. The pen used to prop up the device for this photo op also gives us a glimpse of how thin, or thick, the smartphone will be. The photos, of course, do not betray the hardware of the device, though leaks make us expect a 1.6 GHz quad-core HiSilicon Kirin 910, 2 GB of RAM, 16 GB of storage, and a 5-inch 1080p screen.

Huawei is also doing its fair share of building up hype around the Ascend P7, though probably not as much as its bigger rivals. It just doesn’t have the the financial or marketing muscles of, say, Samsung or Apple and has instead resorted to word of mouth to hype up upcoming devices. That said, of course it still does do some of the marketing itself, like the teaser video below.

Aside from probably making you want to start arranging dominos, or smartphones if you have that many, Huawei’s teaser informs the public that it will be unlocking possibilities in Paris on May 7th, just a week from now. Of course, we’re expecting the Ascend P7 to debut on that day, but let’s hope that Huawei has more good news in store as well.