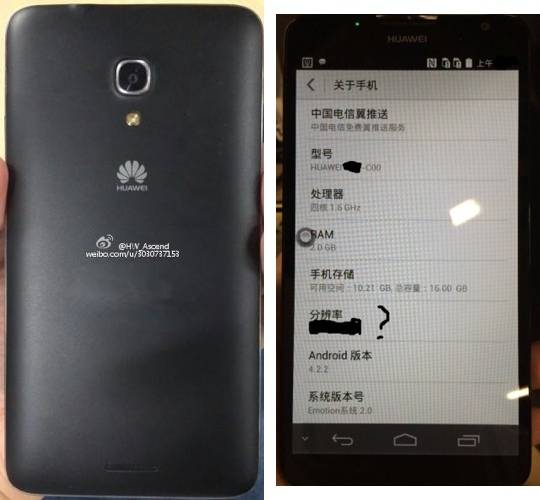 Benchmarks for the Huawei Ascend Mate 2 were spotted about a month earlier. Those details included results from AnTuTu, and they were likely not what many were expecting to see. The results were showing a score of 22,345, whereas we often see results closer to 30,000 with a Snapdragon 800.

Well, flash forward till today and it looks like we may have an answer for those benchmark results. A series of images along with some spec details have arrived by way of the Huawei News blog. The pics can can be seen sitting above and also in the gallery below. Basically, they are giving a decent look at both the front and back as well as the top, bottom and sides of the handset.

Perhaps key though, this leaked tipped the handset as having a 6.1-inch 1080p display and quad-core 1.6GHz processor. The specifics for the processor suggest a HiSilicon Kirin 910 with a Mali-450 graphics core. In comparison, the current model Ascend Mate sports a 6.1-inch 720p display and is powered by a 1.5Ghz Cortex-A9 HiSilicon K3V2 processor.

Other leaked specs for the Ascend Mate 2 include 16GB of storage, 2GB of RAM and Android 4.2.2 Jelly Bean. Basically, it would appear as if the Ascend Mate 2 will be seeing a small bump in terms of processing power and also in display resolution. Despite already having seen some benchmarks and now the basic specs and images, there hasn’t been anything hinting at when Huawei may come forward with an announcement.