The G7 is 7.6mm thick and tips the scales at 165g. Huawei uses Nano molding Technology to create the metallic unibody design. The native resolution for the 5.5-inch screen is 1280 x 720. Under the hood, the smartphone has a Qualcomm quad-core 1.2GHz processor and a 3000 mAh Li-Polymer battery. The 13MP rear camera has a 28mm wide-angle lens and BSI sensor with the 5MP front camera having an 88-degree wide-angle lens. The G7 will sell for 299 euros and will launch in several markets this month with others to follow. 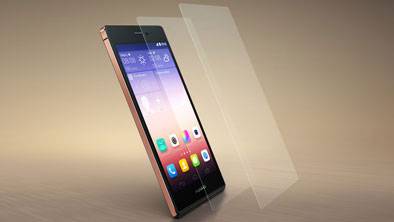 The Huawei Ascend P7 Sapphire Edition debuted in China and the big feature of this phone is a sapphire glass cover over the 5-inch screen. Sapphire glass is one of the hardest materials available and resists scratches and cracking better than the Gorilla Glass common on the market.