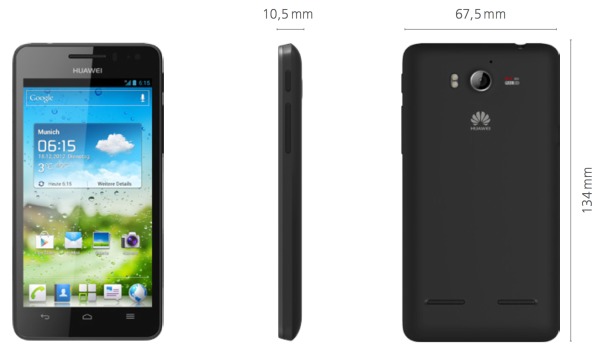 Huawei has more than just a few smartphones in the works early on here in 2013. While they only showed off two at CES, it’s apparent that they have multiple mid-range and high end smartphone coming soon. We’ve mentioned a few already this month but today Huawei just announced the Ascend G615. A quad-core mid-range phone with a 4.5-inch HD display and more.

It’s no Ascend D2 but the 4.5-inch 1280 x 720p HD Ascend G615 looks pretty decent and will be headed to Germany and a few other international markets shortly. It’s quite similar to the recently announced G520, only they’re using a slightly different processor and there’s a few other differences. The Ascend G615 comes with Huawei’s own 1.4 GHz quad-core, instead of a MediaTek CPU.

The only downside to this otherwise decent smartphone is the fact that Huawei will launch it next month in Germany with Android 4.0 Ice Cream Sandwich. Not even 4.1 Jelly Bean. However they state an update to JB will arrive sometime in March, so that’s good news. Huawei’s been trying to offer their higher end phones outside of China, and it looks like this may be the first of many coming soon.