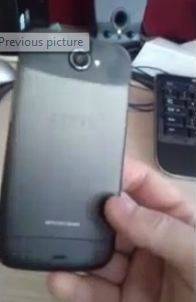 Exciting news for HTC fans this morning, as one of the two models expected to debut at Mobile World Congress in February has jumped through the loops of secrecy to grace YouTube. The HTC Ville is one of the Taiwanese manufacturer’s “hero” devices for 2012, with impressive specifications, a slim profile and subtle styling. One of the most notable features of the Ville (likely a code name) is that it’s rumored to be one of the first HTC phones to reach retail with Ice Cream Sandwich.

Appropriately, HTC Hub broke the news and brought the YouTube video to the attention of the Internet. The three-minute spy video doesn’t show much – it appears to be the Ville in an office somewhere, probably being tested before a carrier announcement, almost certainly in Europe. While it’s claimed that the hardware on display is a prototype, it looks pretty complete as-is, even including the HTS SENSE tag on the back battery cover. Speaking of which, the skin running on Android appears to be Sense UI 4.0. That implies (but doesn’t guarantee) that the phone is running Ice Cream Sandwich. The software menu states that both Sense 4 and Android 4.0.1 are running. Interestingly, the model on display uses the three Ice Cream Sandwich navigation buttons, but they’re capacitive buttons below the screen.

Check it out for yourself below – unfirtunately, 360p is the best we’re going to get for the moment.

The HTC Ville’s rumored specs are as follows: a dual-core 1.5Ghz processor powers a 4.3-inch screen running at qHD resolution. That’s not mind-boggling by any means, though the Ville is expected to use an AMOLED display panel. The Ville is expected to be the thinnest HTC device to date at just 8.4mm 0 for refference, that’s almost exactly in between a DROID RAZR and DROID RAZR MAXX. Not bad for a company known for rather bulky designs. The Ville is expected to have a formal unveiling at Mobile World Congress in late february, along with the new quad-core flagship, the HTC Edge.