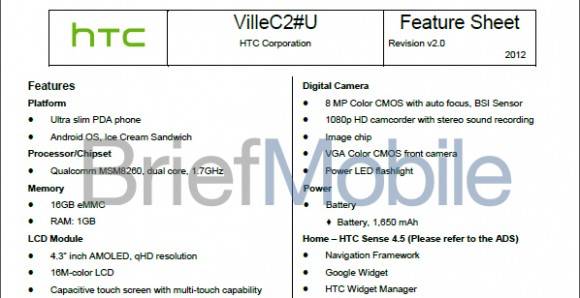 For months we had operated under the assumption that the Ville was HTC’s internal codename for the One S, now gracing Europe and T-Mobile with its presence. Now a new Ville has popped up in a spec sheet spotted by Brief Mobile. The list details a phone that’s nearly identical to the One S (at least internally) with one crucial difference: it’s running a Qualcomm Snapdragon S3 processor instead of an S4.

That would still give the phone dual-core capabilities and a 1.7Ghz clock speed, though this is mentioned as a possible typo. Other specs align perfectly with the One S, from the 4.3-inch qHD screen to the 8 megapixel camera. Android 4.0 is present, but strangely the HTC skin is listed as “Sense 4.5”. Either is phone isn’t intended to come to market for many months, or there’s another typo. 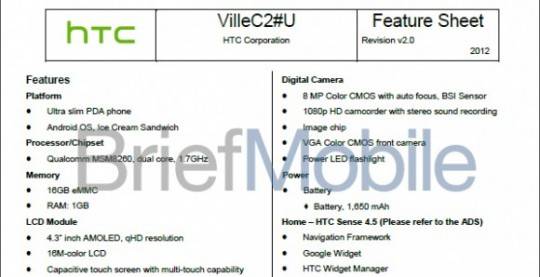 Note that an “image chip” is listed as well, so whenever and wherever the Ville C (almost certainly a codename) launches, it won’t have the HTC DROID Incredible 4G LTE‘s regrettable lack of the Image Sense processor. Other little touches, like a 1650mAh battery and a VGA front-facing camera, put this one on the high side of the mid range. No carrier, pricing or date information is available at present.