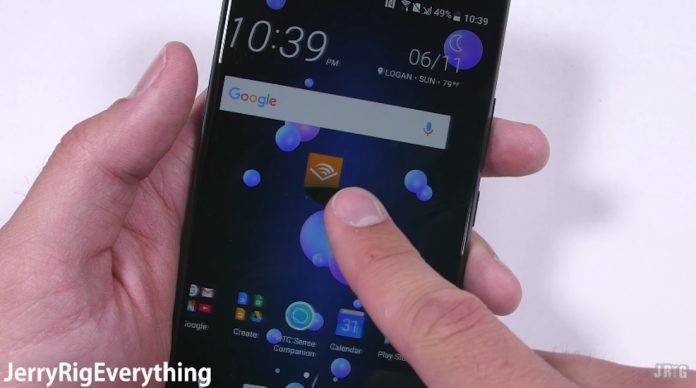 Over at DxOMark, the HTC U11 is one of top winners when it comes to mobile photography. It overtook the Google Pixel, scoring a total DxOMark Mobile score of 90. Earlier this week, Zack Nelson managed to test its durability by doing the usual scratch, bend, and test. People have high expectations from the HTC U11 because it is one expensive, premium flagship phone. It is one-of-a-kind because of its squeezable edges (aka Edge Sense) that can launch different functions you program. The device is also water-resistant so it can survive being dropped into the water.

We’re curious to know if it is better than the HTC U Ultra which passed JerryRigEverything’s tests with flying colors. As for the HTC U11, the scratch test proved that the real sapphire crystals used it the display doesn’t scratch even if you place your phone in your pocket with your car keys and coins. The Gorilla Glass 5 scored a level 6 which is normal, making it comparable to the Samsung Galaxy S8 and iPhone 7 if we’re going to talk about screens. However, a screen protector is still recommended because common minerals may still scatch it.

Scratching the fingerprint touch pad didn’t destroy its function. The earpiece is covered by some fabric so it is advisable that you keep it intact. The Gorilla Glass 5 covers the front-facing camera so it is safe.

The sides are made of pure metal. Even the buttons are impressive with its being metal. There is no 3.5mm headphone jack so HTC was able to make the phone thin. Scratching the metal sides didn’t affect the Edge Sense.

Bending the phone from back is a complete disaster. It also bent easily from the front, breaking the screen and killing off the phone. Interestingly, the black glass is still intact.

According to Zack Nelson, the back glass rests on top of the frame so there is no structural support. As for the front glass panel, its 3D curved design with a flexible frame made it not so durable. The frame isn’t as rigid and there is no enough buffer between the metal and the glass. The result was fatal because the phone is now inoperable. It is highly recommended that you use a screen protector and a very durable phone case for the HTC U11 if you want it to survive everyday use.