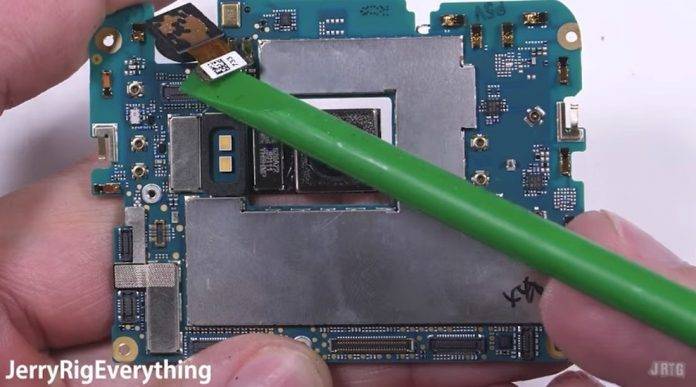 The HTC U11 is still a hot topic especially since it failed Zack Nelson’s Durability Test. The company just said sales of the U11 is doing better compared to the M10 and M9 so we’re really interested to know as to how the device will perform. Failing JerryRigEverything’s bend test put the phone in his Shelf of Shame.

The back glass panel is still intact but bending it made the front display crack. It happened quickly so we want to know why. We noted earlier that the frame is not durable enough especially because of its flexible and 3D curved nature. Zack tried to pry open the defective HTC U11 to see what’s inside. He particularly wanted to know how the pressure sensors were installed for the new Edge Sense feature.

Zack opened the defective HTC U11. Glass is no longer glued to the frame so it’s fairly easy now to open. Using a blog dryer and a thin metal pry tool, the edges were opened and the glass was separated.

You will see a black stuff that according to Zack, is what keeps the device water-resistant. Removing the panel revealed the battery that can be disconnected easily. The pressure sensor ribbons are underneath and placed on both sides of the unit.

Removing the pressure sensors showed the power and volume buttons that can be easily snapped and unsnapped. The SIM card tray has some rubber ring so water can be prevented from seeping in.

Also easy to snap off are the rear and front-facing cameras. Zack noted that the cabling of the phone is neat and organized inside compared to the HTC 10. More adhesive can be found inside and around the center hole. Checking the components further definitely showed us how some parts are kept tight.

The video showed us how the squeezable sensors are built into the aluminum frame. Note that the sides are not capacitive unlike what others thinks. Watch the teardown video below: