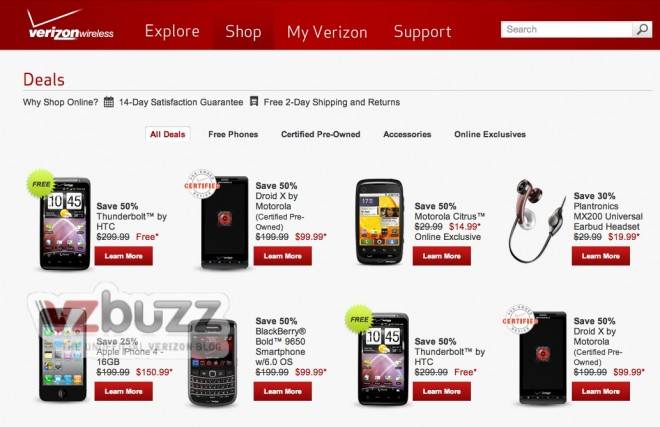 Verizon may have a new promotion kicking off soon and you could get that awesome HTC Thunderbolt for the low low price of FREE! Obviously that is with a new 2-year contract signing of some sort but a Thunderbolt for free sure does sound awesome. If you look at the ad you might also see the Droid X for $99 but listed as “certified pre-owned”. Users might be able to get the Droid X for only $99 and that is a deal in itself.

If you are still rocking the original Droid this upcoming promo might be just in time for you to upgrade to a fast new 4G LTE Thunderbolt or that Droid X. Our man Chris Burns recently posted a review of the Thunderbolt after 3 months of use, it’s a great read for those interested in the device as he loves it.

We don’t know when or if these deals will be showing up on Verizon, but if they do I’m guessing there will be a few happy campers that get that Thunderbolt for cheap, er I meant FREE! You might notice the iPhone 4 is listed as $50 off in the same ad, I don’t know why anyone would want that when you have the Thunderbolt clearly “above” it, but I figured it was sort of worth mentioning.