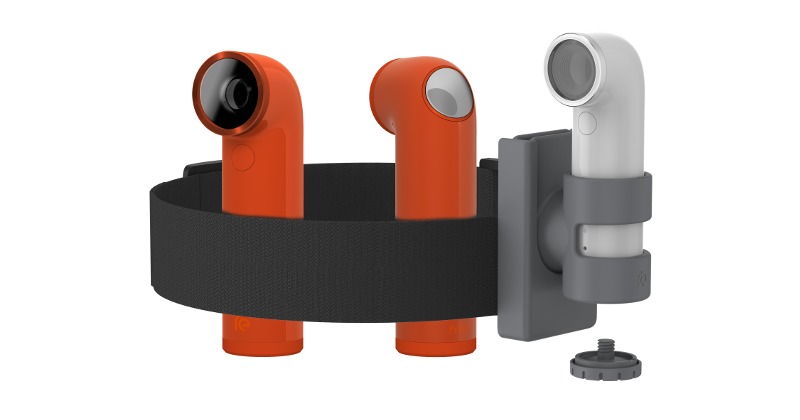 HTC is indeed trying to venture out into new markets and, as expected, digital imaging is just one if its first stops. With the announcement of a slew of new products, including version 1.0 of the Zoe collaborative video editing app, a new EYE imaging experience, and the HTC Desire EYE, HTC is showing that it means serious imaging business. But perhaps nowhere does it look more serious yet at the same time somewhat “amusing”, to put it nicely, than with the RE, what it bills as a “remarkable” little camera.

Of course, you can cue “re-” jokes about this, but you have to admit, this diversion from its regular path definitely requires some guts considering this is HTC. While its smartphones have been critically acclaimed, sales and profit figures don’t usually reflect the interest surrounding its devices. Jumping into a new market, at least as a far as HTC is concerned, is a leap of faith. Especially when one of the standard bearers is a quaint, weird-looking camera.

There’s a reason for that strangeness in form, at least according to HTC. The RE camera has been designed, it says, to fit snuggly into your hands. The premise is that it is natural to hold and will make taking photos and videos easier and faster. The RE’s motion sensor automatically detects when it’s picked up and turns on the camera automatically, so no more need for waiting for it to power up from sleep. A single tap on the shutter button takes a still while a longer press starts recording video. That’s all there is to it. No worries, no fuss. And it’s IPX7 certified, giving it the ability to operate in water for a depth of 1 meter for 30 minutes.

As far as camera specs go, the HTC RE straddles the “decent” side of the equation, with a 16 megapixel 1/2.3-inch CMOS sensor. The lens has an aperture of f/2.8 and an ultra-wide angle of 146 degrees. It is able to record 1080p videos at 30 fps, but for a 4x slo mo capture, you’ll have to settle for 720p. Of course, the camera is a smart one, so integration with mobile devices is a given.

It can connect to such devices with Bluetooth, WiFi, or even USB. Smartphones can serve not only as remote controls and viewfinders, they can also act as backup storage, though the RE comes with an 8 GB microSD card, which you can replace with something up to 128 GB. That same RE app will soon allow live streaming of videos from the RE camera to YouTube as well.

The goal of the HTC RE is to remove obstacles between the viewer and the object, removing the need to look through viewfinders and screens. That said, the RE doesn’t seem to have a window of its own, so it just presumes you instinctively know how to position that perfect shot or are not worried about shaky videos or rotated photos. Either that or you will be left relying on a smartphone for staging the shot, which sort of defeats the RE’s entire purpose.

The HTC RE camera will be available in the US late October, with other markets to follow. There will be some accessories available for the camera as well, including a car charger, a charging dock, lanyards, and several types of clips for mounting the RE in every situation imaginable.