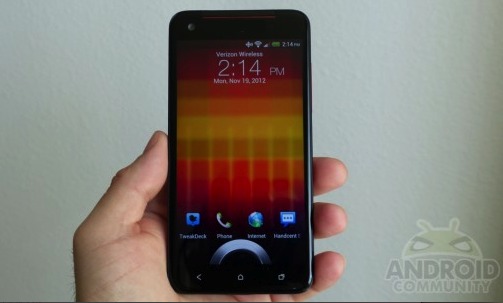 Back in October of last year HTC announced the impressive J Butterfly as the world’s first 5-inch 1920 x 1080p full HD smartphone, and so far it has been quite popular. Later launching in the US as the DROID DNA, the 5-inch size has been successful enough that HTC is already prepping their next generation and it should be “coming soon” according to reports.

We’ve heard the HTC One will be their only flagship device for this year, but that’s up in the air at the moment. We will see the J Butterfly’s sequel 5-inch or bigger phone launched this year, and possibly a replacement to the DROID DNA. The One is their only flagship, and their only device launching internationally on all carriers as their “featured device” but that doesn’t mean others won’t arrive.

At this point it sounds like the One is their flagship for everything, but they’ll still release a few high-end phones that will be for select markets. Add in the fact that Verizon probably won’t be getting the One, and we’ve been seeing reports of a DROID DNA+ making the rounds, this is starting to all make sense. Verizon could have passed up the One because shortly after it launches they’ll release the next-gen DROID DNA this summer. At least according to reports from FocusTaiwan.

They specifically mention the J Butterfly, not the DROID DNA, but they are essentially the same phone. According to their sources the new J Butterfly or DROID DNA is already well under way and actually “due soon” – so hopefully we hear additional details on that shortly. Maybe this was why Verizon passed on the One, but we’ll have to wait and see.