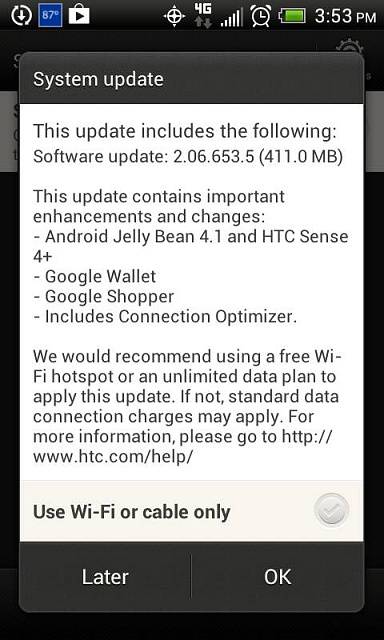 Boost Mobile looks to have begun rolling out an update for the HTC One SV. This update will bring your handset up to Android 4.1 Jelly Bean and is arriving with HTC Sense 4+. Boost Mobile has yet to post an official changelog for the update, however there are plenty of details that have been shared.

For example, in addition to the usual Jelly Bean goodies, this update also includes Google Wallet, Google Shopper and the Boost Mobile Connection Optimizer software. Of course, Jelly Bean also means Google Now, the expandable and actionable notifications and an improved widget experience. Android 4.1 also brought an improved keyboard that had a focus on improved word prediction, a better dictionary and text-to-speech.

Anyway, after this update has been completed your handset will be sitting at version 2.06.653.5. The update is said to measure in at a hefty 411MB in size, which really goes to say that you will likely want to download this one using a WiFi connection. Well, that or make sure you have plenty of data left for the month.

Those with either of those handsets likely know the drill. You can either sit back and wait for an update notification to arrive or you can take the proactive approach and go looking for it. Given we suspect many will take the latter approach, you should grab your handset and head to Menu -> Settings -> About phone to get the process started.