HTC’s new One series is getting a lot of attention as of late, and with good reason. Currently the new phones are available across Europe but we are still waiting for them to land here in the states. AT&T has the One X coming soon, and some new leaks have all but confirmed the HTC One S will be available from T-Mobile on April 25th.

Spotted by the folks from TmoNews are some new documents floating around at T-Mobile showing April 25th for the official release date. We saw a few similar dates leaked previously but now that multiple leaks have been spotted this is about as official as it gets. Until T-Mobile says it themselves of course. 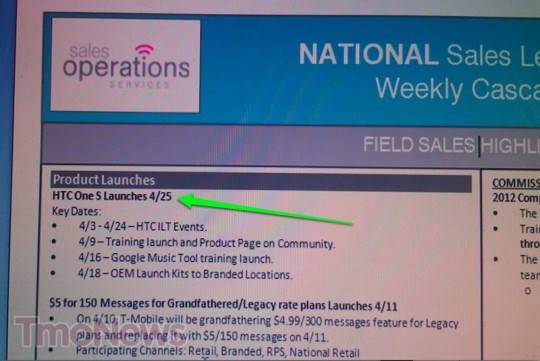 If you’re excited about the One S, or would like to know more make sure you check out our extensive HTC One S Review. Comign with a 4.3-inch display, an impressive and powerful next-gen 1.5 GHz dual-core processor and that awesome camera this will be the phone to get this summer from T-Mobile — that or the Galaxy S III of course. Hit all the links below for all the One S news you can handle.