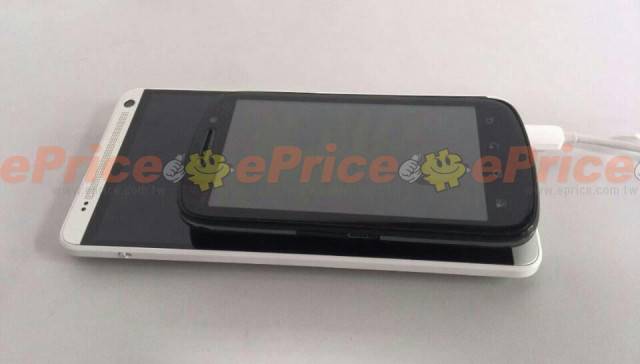 Here’s a new leaked photo for the rumored bigger sibling of the HTC One, this time in comparison to a Motorola XT882. Not only does the picture emphasize the HTC One Max‘s gigantic size, it also reveals a mysterious side switch.

Talk about the HTC One Max began circulating around July, with rumors hinting at a coming larger version of HTC‘s flagship smartphone. It is supposedly coming with a 5.9-inch display but will retain the HTC One‘s resolution. The CPU will also be upgraded from a Snapdragon 600 to a Snapdragon 800 running at 2.3 GHz. In all other aspects, the One Max will remain the same, carrying 2 GB of RAM and 16 GB of storage, expandable with a a microSD slot.

The photo reveals just how much the One Max’s 5.9-inch screen dwarfs the Motorola XT882’s 4 inches¸ as well as how thin it will be, compared to the XT882’s 0.52-inch thickness. Another detail shown is a small toggle button that is presumably used to open the back cover, although there is no confirmation on that one. It is rumored that the Chinese version of the device will have support for two SIM cards at the expense of a replaceable battery.

There are no new details regarding the HTC One Max reveal date, which is expected to happen in September at IFA, coinciding with Samsung‘s own event to unveil the Galaxy Note III and the Galaxy Gear smartwatch. It seems though that HTC is already preparing to drop some hints and clues along the way in Twitter and Instagram with the slogan “Big things ahead.”