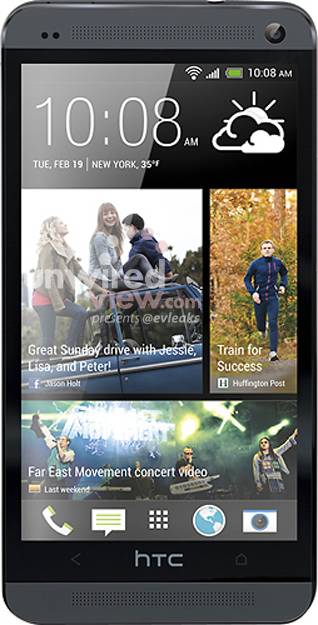 Just when we had thought we seen everything related to the HTC One leak, it looks like we now have another image render to check out. This latest brings the familiar design that we saw earlier in the month, except it shows the handset in the other color. The previous was shown in white and this latest shows the handset in black. Otherwise, not much new in terms of details which really just goes to say that we have already seen just about everything. Well, everything except for the official announcement.

The announcement of course, is expected to happen during the February 19th event. Aside from the color, the few minor differences in this latest render deal with the images on the display. You may have noticed the weather widget. This time around we are seeing New York, and if you remember back, the white HTC One render was showing London.

This black render is also showing some differences in the data displayed. The previous white render had three items, all of which were from Facebook which seemed to imply that was a Facebook widget of some sort. The key here, this one is showing data from Facebook as well as others. Basically, this just seems to imply that the data is customizable. Touching back to the details we saw yesterday and it is looking like those in the US will be able to pick up an HTC One on March 22.

Word has it that HTC will release the One with T-Mobile, AT&T and Sprint with price points of $199.99 and $299.99 for a 32GB and 64GB model respectively. Finally, the specs are remaining consistent and include a 4.7-inch 1080p display along with a quad-core processor, 2GB of RAM, Jelly Bean and Sense 5. At this point we are not sure what else is still able to be leaked, however given these One rumors and leaks seems to be so consistant, we probably shouldn’t be surprised if something else is mentioned before the 19th.