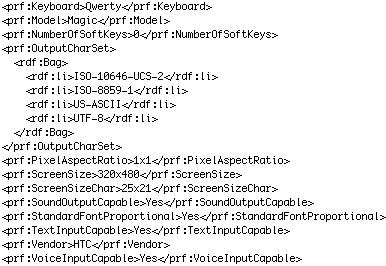 In the second HTC Magic (aka T-Mobile myTouch 3G) rumor of the day, HTC are tipped to be readying a version of the handset with a QWERTY hardware keyboard.  Signs of the new smartphone were found in a new user agent profile file, seemingly for a device with the same specifications as the original Magic but with the addition of a physical keyboard.

Also curious is the name on that user agent profile.  While HTC are listed as the handset manufacturer, the file itself seemingly comes from Google (at least going by the copyright details at the very top).  That’s led to some speculation that this could be the business-focussed Nexus device Google tipped earlier this month.

While we’ve already seen what’s rumored to be the Motorola Shadow, another QWERTY handset, potentially giving Google a choice of “best of breed” Android devices it could include in its store.  Adding more confusion to the mixture, there’s no sign of such a phone on the leaked 2010 HTC roadmap.

Update: TMoNews are saying that an Android device known as the T-Mobile myTouch Slide (aka myTouch 2) is tipped to arrive on May 17th.  That’s believed to be the successor to the original myTouch 3G, and add a slide-out QWERTY keyboard together with black, red or white casings. [via The Unlockr]