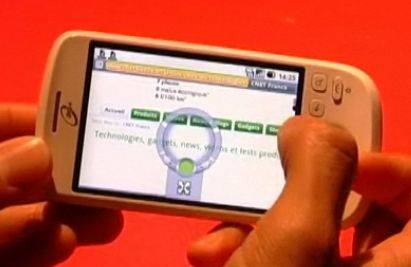 In addition to the landscape QWERTY keyboard, HTC have added a new zoom control wheel to the HTC Magic smartphone.  Seemingly intended to offer more precise zooming without treading on Apple’s pinch-and-spread patent toes, the wheel is called up with a double-tap.

In the CNET France video below, you can see the zoom-wheel operated in both the HTC Magic’s browser and its photo viewer.  Thanks to the compact size of the Magic itself, you could realistically control the wheel and hold the smartphone with a single hand, not something you can say the same about pinch-and-zoom.

No word on whether this new zooming control feature will be offered to existing Android G1 owners, though of course the nature of the Android platform means that what Google/HTC don’t offer officially, the open-source community will liberate themselves.  The HTC Magic is expected to arrive in various European countries in April 2009, price to be confirmed.