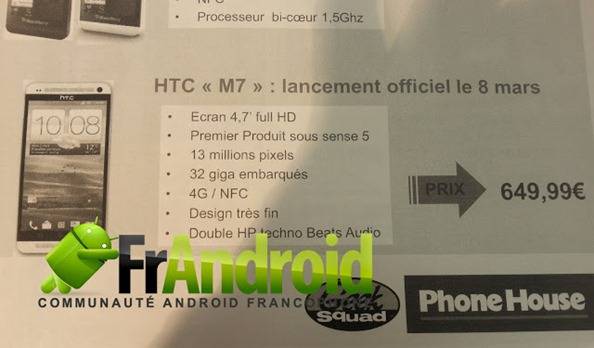 Following up on the previous HTC M7 release date rumors and it looks like we have some further evidence pointing towards a March 8 release date. This date was previously mentioned at the end of last month and at that time we were referring to US availability. This time around we are once again seeing the same March 8 date, however the details are coming by way of a French retailer.

This leak has arrived by way of the French language FrAndroid blog who have posted what appears to be a sales flyer for Phone House. According to details in the flyer, the HTC M7 will be selling for a contract-free 649.99 EUR. While the dollar amounts do not always make for an exact translation between currencies, that would be nearly $900 in terms of US dollars. In this case, we at least hope that translation will not hold.

Otherwise, the flyer is showing some specs and an image. The specs are what we have been seeing in the rumors and note the M7 as having a 4.7-inch full HD display, 32GB of internal storage, NFC, 13 megapixel rear-facing camera and 4G connectivity. The flyer also mentions that handset as having Sense 5. No specific mention of Android, however that has been shown to be Jelly Bean.

The one catch here, the image of the M7. This pic is showing an older render of the M7, which does cause us to wonder about the accuracy. Then again, this could be a case of a rough layout for the flyer in which the image will be swapped out once the official pics are available. Regardless though, we are expecting to learn the official details for the M7 during the February 19 HTC event.