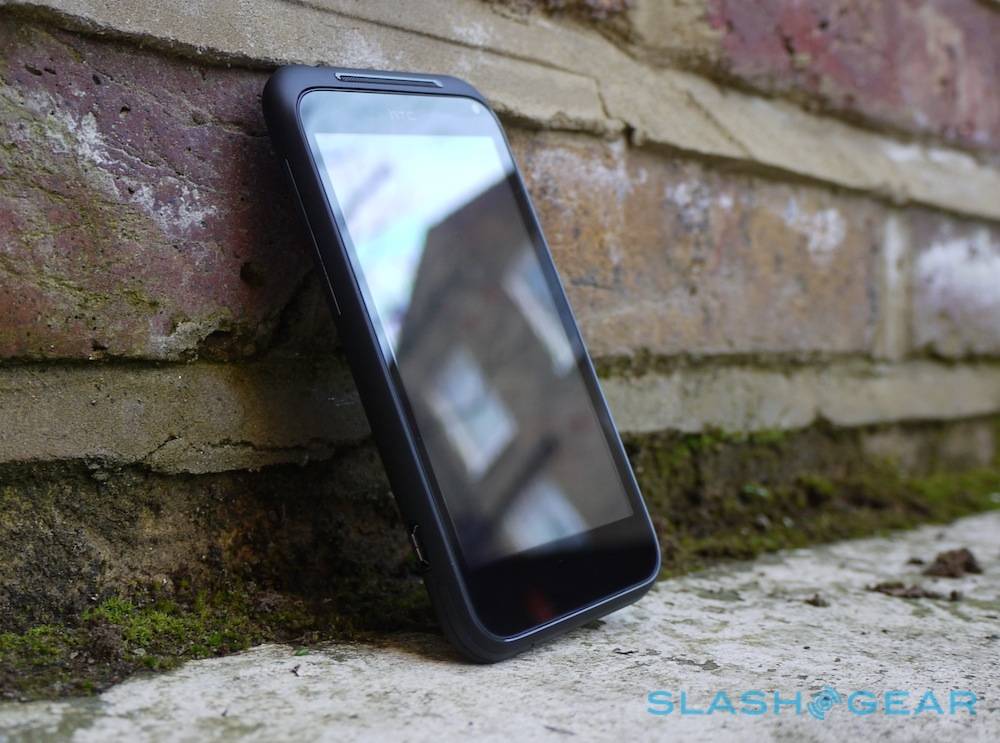 Our man in England Chris Davies has done it again with a fabulous review of the HTC Incredible S, a lovely phone that, although he expected a bit of letdown in light of the slightly less-than-top-tier nature of the phone, Chris found himself liking quite a bit. We got to handle this phone back at Mobile World Congress and now Chris has the full dish on the situation, lovely pics and video example and all!

The HTC Incredible S has 120 x 64 x 11.7 mm chassis with a total weight of 135.5g, a rather unique backing with a molded “pool liner” look and a slim feel to its entirety. On the front you’ll find a slightly less than largest on the market 4-inch WVGA 800 x 480 touchscreen with a 1.3-megapixel camera LED indicator light, whilst on the back you’ll find a camera that equals the top of the pack at 8-megapixels. 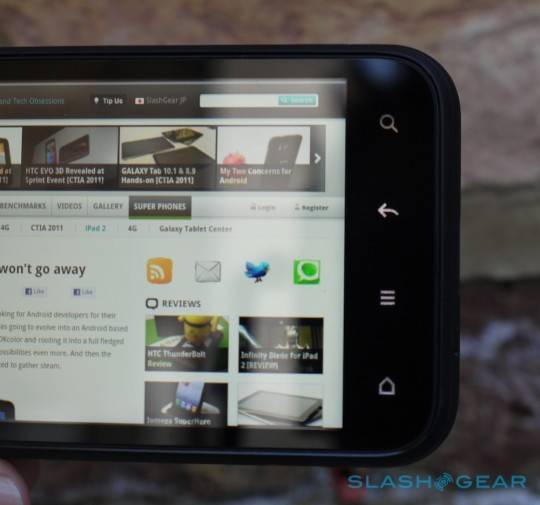 As for the set of four buttons, home, menu, back, and search, they sit either portrait or landscape depending on the way you’ve got the phone sitting. They flip their orientation the same way your display does when your phone is turned. Clever! You’ll find a very similar situation going on when you check out the US version of the HTC Flyer, the HTC EVO View 4G (essentially exactly the same with a bit of a different color scheme.) It’s there that the entire set of buttons hangs out at the bottom of your display no matter which orientation is chosen. 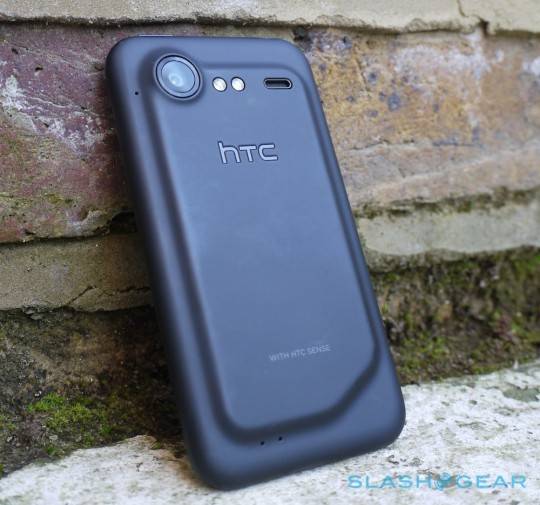 Inside you’re going to find a 1GHz Qualcomm Snapdragon MSM8255, a fat processor in its own right, but still not the dual-core we’re just about to be expecting as standard. Connectivity includes HSPA/WCDMA and quadband GSM/EDGE, along with WiFi b/g/n and Bluetooth 2.1, and there’s GPS, a digital compass, g-sensor, proximity sensor and ambient light sensor, and for the final guts, 768MB of RAM and 1.1GB of internal storage.

Take a peek at a video sample as recorded with the HTC Incredible S:

and a photo taken at full res: 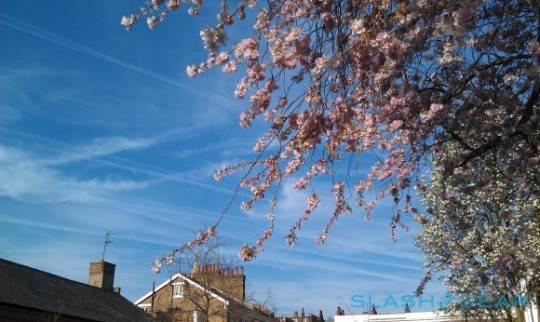 What you’re looking at here is not the top of the pack. This is a powerful phone, certainly one that’s going to do most of the Android stuff you’ve grown to know and love, and you can take some fat photos and videos with it as well. This phone features HTC Sense, a user interface that sits on top of Android, something that a massive amount of Android enthusiasts quite often get down on. This newest version of Sense, however, we’re pretty much having a really positive time with. Skins and healthy wallpapers galore, a smooth interface here and there and everywhere, and you’ve got a winning system that doesn’t NEED to be changed if you’re alright with it – and we’re definitely alright with it. I say WE because we’re using the same HTC Sense over on this side of the pond and we’re all in this together. 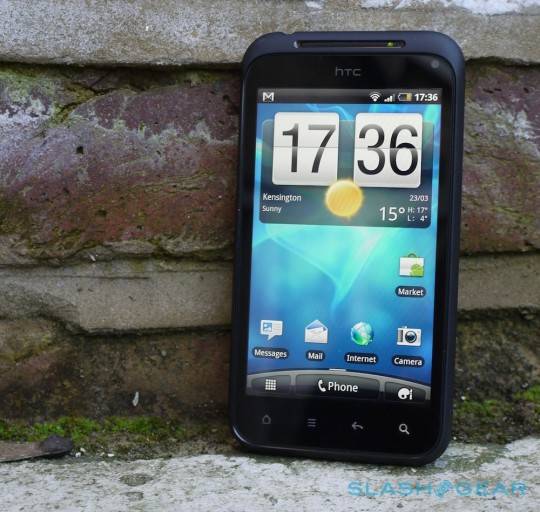 Benchmarking this phone with Quadrant rolled it in at 1559, which, for example, is higher than a Nexus S running Android 2.2 Froyo, the same version of the mobile OS running here. Flash 10.2 is functional but still leaves some dropped frames in video here or there even over Wifi. Mobile hotspot appears to be working perfectly well for up to 8 tethered devices (on 3G of course.) Will this phone blast forth in the USA with 4G instead? We shall see. Let’s hope for such a situation.

Battery time for Chris on an average day of mixed use was approximately a day. That’s pretty freaking good for a phone as powerful as this, especially since we know Chris isn’t your average smartphone user. One charge a night should suit you fine with this handset. 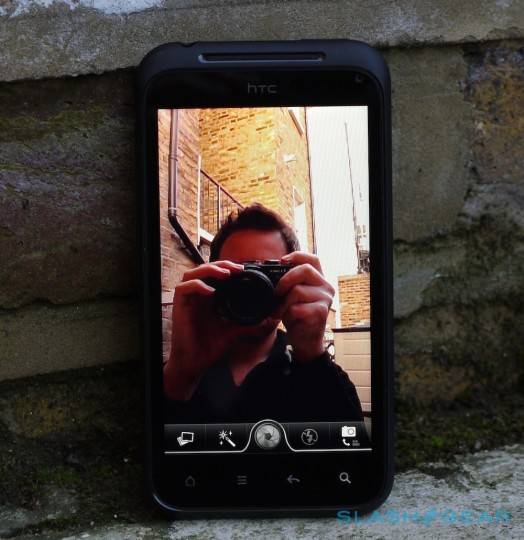 As Chris notes, this device happens to hit a sweet-spot right in between the 3.7-inch Desire and the giant 4.3-inch Desire HD. If you’re dissatisfied with either of those phones, this may well be the device you desire, if you know what I mean. This fat (but not TOO fat) display is a Super LCD, and one that Chris says is “excellent,” so entertaining videos and games should be no problem just so long as the processor can handle them.

As far as the no-dual-core goes, we’re still in with the pack of people who aren’t quite sure about the battery usage when it comes to doubling down. A dual-core processor on a smartphone more often than not leads to a rather short battery time whilst comparing to a single-core – thusly Chris notes, and I and we agree, this might be the phone for you if you’re into working an average workload and you’d like a battery life that’s longer than 6 hours. Beware of the incoming set of games and apps though set up for the dual-core wave – you may be left in the dust.

Take a peek at Chris’ full review over at [SlashGear]