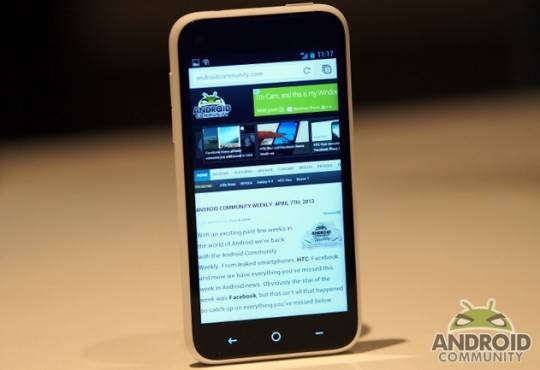 AT&T lowered the price of the HTC First late last week and naturally, that had some questioning the success of the phone. To give a little background here, the HTC First was the first phone to launch with Facebook Home and it came available with AT&T on April 12. Basically, that is to say the handset had only been available for about a months time before that price cut arrived. The timing seems quick, however AT&T also lowered the price quite significantly. The HTC First went from $99.99 down to $0.99 on a two-year agreement.

Putting the price cut aside for a moment, earlier this morning we began seeing reports that touched on the amount of devices that AT&T had sold. Some estimates had the sales at about 10,000 units. That number came courtesy of Trip Chowdhry who is an analyst with Global Equities Research. Another report estimates that HTC First sales were less than 15,000. While neither sound all that great, new reports suggest AT&T is close to discontinuing the Facebook Home phone.

The details of the discontinuation come courtesy of BGR who are reporting based on word from a person they describe as a “trusted” source. Basically, it was said that the end is near for the HTC First. AT&T has yet to comment and at the moment, the handset remains available and priced at $0.99 on a two-year agreement.

The HTC First may have Facebook Home pre-installed, however the app/launcher can also be downloaded directly from the Google Play Store. The downloads for the app/launcher have recently reached 1 million, however the Google Play Store rating is sitting at a rather low 2.2. That rating is based on comments from 16,803 users, of which 8,855 gave a 1-star rating. If you check the comments there are some interesting opinions and thoughts of the launcher. For example, one user mentions that Facebook Home could be a nice lock screen, but not a nice launcher.

Shifting back to the HTC First and there is another take here. While it is being touted as the Facebook phone with the emphasis on Facebook Home — it is actually not all that bad as a mid-range Android handset. Keep in mind, Facebook Home can be turned off and you would be left with a stock Jelly Bean installation. Not bad for less than a buck. Now we wouldn’t necessarily suggest everyone run out and purchase an HTC First before AT&T gives it the boot, but it may be a handset to consider. Finally, similar to AT&T, HTC has said they won’t comment on rumor or speculation.