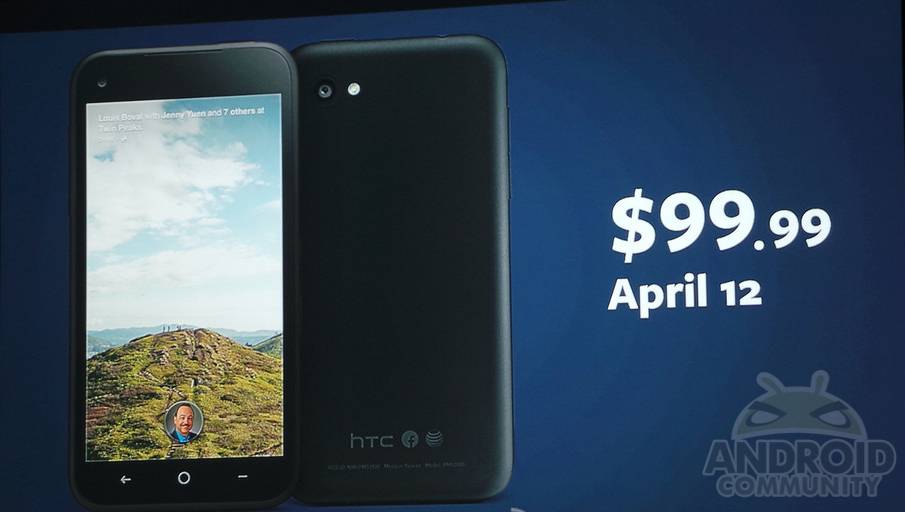 For all you social network butterflies the folks from Facebook came out swinging today. Or at least some might think so. As I’m sure many of you know today Facebook detailed their plan to get social to the core of Android. With Facebook Home taking over our smartphones, chat heads making communication easy, and of course the first device known as the HTC first. If you want one read on to find out how and when.

Confirmed just moments ago is the release date, pricing, and everything you need to know about the HTC first – the first Facebook Phone. Check out the HTC first revealed post for more details on the hardware itself. So if you already know everything about that 4.3-inch 720p HD Android 4.1 Jelly Bean smartphone covered in Facebook, how do you get one?

The HTC first will be available exclusively from AT&T starting on April 12th. Originally many reports, suggestions, and rumors had it listed as coming for free or $49 with a new 2-year contract, but sadly that isn’t quite the situation. The all-new HTC first will be $99 with a new 2-year contract. That’s the same price as the recently discounted AT&T Galaxy S III – just a thought.

So what makes this special, or should you just download the coming soon Facebook Home app from the Google Play Store? Well according to HTC’s CEO Peter Chou the HTC first will offer a “unique experience” and went as far as to mention their device having Facebook Home deeply embedded will offer some benefits. We’re still looking for more details on that, so stay tuned.

That aside, should you want one the HTC first is available for pre-order as we speak from AT&T, and will be delivered come April 12th for just $99. Who’s buying?