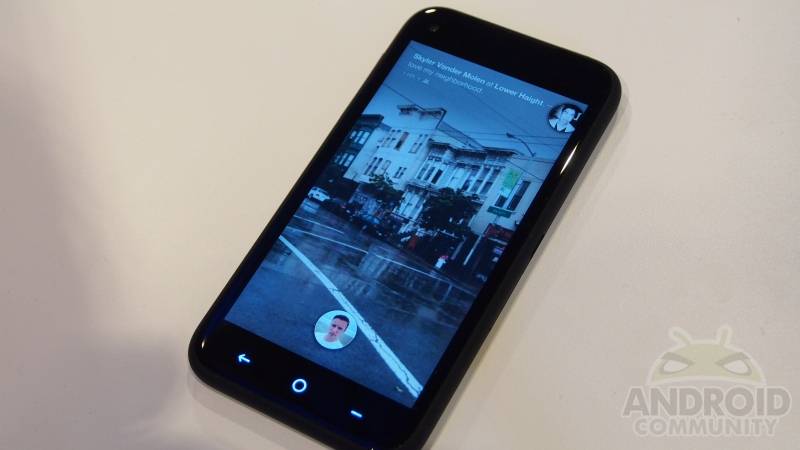 After months of rumors and speculation, today the first true Facebook Phone has finally been unveiled. While we still want to call it the Facebook Phone, it really isn’t. Instead it’s just the ‘first’ of many that will be coming soon. Facebook Home will launch on April 12th, and the HTC first with an embedded and unique Facebook Home experience will too. We just got our hands on it, so read on for our initial thoughts and a quick video.

In case you guys haven’t been following along with the news today, Facebook Home is essentially an extremely skinned version of Android that takes over nearly every aspect of the main features of a phone. We have everything and more below, but for now lets focus on the HTC first and Facebook Home.

The HTC first is a decent little mid-range phone, and so far we’re actually pretty fond of the hardware. HTC is no stranger to offering excellent hardware, and the HTC first is built with quality in mind. They’ve gone with a unibody design coming in black, white, red, or light blue and we’ve got the black version in our hands as you can see below. And no, the back is not removable.

With a 4.3-inch 720p HD display and a Qualcomm Snapdragon 400 series dual-core processor and 1GB of RAM, it’s fairly fast. You get a 5 megapixel rear camera and 1.6 front shooter, and of course AT&T 4G LTE for blazing fast speeds. As you can see we have an odd round home button, then a back and ‘minus’ button. A good idea of the look and feel, we’d direct you to the HTC DROID Incredible 4G LTE with a focus similar to the One.

Facebook appears to have really improved their skills lately, because it seems much faster than the usual Facebook app. Not to mention our data speeds are slow here. We’re pretty impressed with the visuals and animations, and the full HD beautiful content is a bit refreshing. It’s like they took Google+ and made it bigger, filled the entire screen, and covered it in Facebook love. We are a little worried that users will be accidentally liking things on accident – like all the time. A simple double tap will like an image and with them easily filling your screen, it might happen more than you’d think.

We have more videos (above) that will give you a better look at Facebook Home, but for now enjoy the eyes-on look above. Overall we’re leaving a little more impressed than we thought we’d be. The device feels well built, is somewhat thin, and as expected Facebook Home rocks front and center. The design is elegant and minimal and we have HTC, Facebook, and AT&T logos nicely on the bottom backside.

If you’re interested in this the HTC first and Facebook Home will both be available April 12th. Hit the links below for more details on both and stay tuned for even more video coming up quick!