If there’s one thing that’s important about a phone, it’s how thick it is. Yes, no matter how powerful a phone is, what its capabilities are, how much it costs, what carrier it’s on, what part of the world it’s distributed in, what color it is, who manufactures it, how big its display is, what kinds of outputs it’s got, what kind of media it can access, or whether or not it can stand up with a built-in kickstand. No, it’s the thickness. Or the thinness!

Of course it’s the absolute thinness, right? It’s HTC, and as far as HTC is concerned very recently, there is only one perfection in overall form, and it’s the size you’ve most recently seen in the HTC Inspire 4G, HTC ThunderBolt, HTC EVO 3D, and oh – does that mean the ThunderBolt and the EVO 3D are essentially the same size? It sure as heck does. 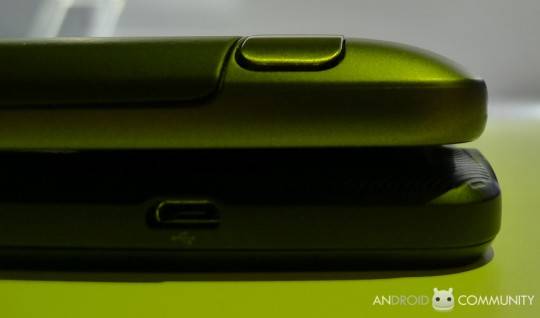 But there is a bit extra popping up the back of the HTC EVO 3D for its 3D camera, and if you’d like to know, the kickstand is not included because that area where the kickstand would normally be is taken up by a fat battery. Also, if you add the extended battery on to the HTC ThunderBolt there’s no contest – like a two story house verses a one. Also take a peek at a couple other close-up shots of the HTC EVO 3D we’ve got here and get ready for the full review down the line.