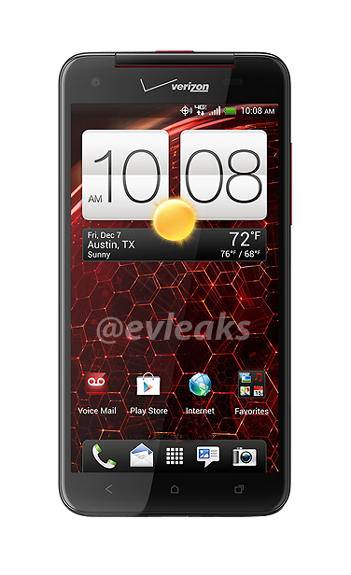 With HTC’s newest smartphone clearing the FCC this week followed by Verizon and HTC announcing a joint press event next week in New York City, we knew an official press photo of the HTC DROID DNA was coming soon. Today as usual, the awesome dudes from @evleaks delivered again. Giving us the cleanest and best press shot yet of the upcoming HTC DROID DNA phablet.

Sadly we don’t really learn anything new here, other than the fact that this upcoming 5-inch smartphone will be awesome. The HTC DROID DNA comes complete with a 5-inch 1080p 440PPI display, Android 4.1 Jelly Bean, a quad-core 1.5 GHz S4 Pro processor, 2GB of RAM, 16GB of storage, a 2,500 mAh battery, and of course rocking Verizon 4G LTE speeds.

The FCC report also confirmed global GSM radios were on board, but other than that the details are still rather light on this impressive looking smartphone phablet hybrid from HTC to take on the Galaxy Note II. Looking closely at the image above you can see the background wallpaper at the very top actually matches the image used for the November 13th press invites, so it’s safe to say this is exactly what we’ll see next Tuesday.

Previous rumors and leaks we received have stated the HTC DROID DNA would be arriving on Verizon Wireless come December 6th for $199 or $249. While usually this means nothing, the date on the press photo says December 7th, so it could be a sign that the 6th or 7th could indeed be the launch date. We’ll be in NYC live for all the videos and details you can handle about this new 5-inch HD smartphone so stick around.