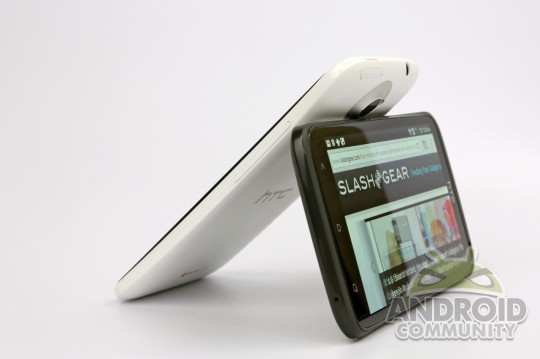 Would you rather have a larger phone with a bigger battery that lasts forever? Or a thin, sleek and sexy phone? This was HTC’s question and apparently they decided to shelf the bigger battery plans to compete with the DROID RAZR MAXX and opted for a mild upgrade to the battery. This will enabled them to produce the thin and awesome phones like what we are seeing today in the HTC One X and One S.

According to our friends and sister site SlashGear, today at a conference in Seattle HTC’s VP of portfolio strategy Bjorn Kilburn cited research they’ve conducted throughout 2011 which helped them decide that customers wanted thinner and sleeker phones, so they cut back on future plans and took larger battery ideas out of their roadmap. Now the HTC One X has a large 1800 mAh battery, and lasts plenty long, but it’s no comparison to the DROID RAZR MAXX and its 3300 mAh battery.

What this essentially means and what we are hearing is HTC had plans for large 3000 mAh batteries, and super sleek phones for the future, not the current ONE series, but opted to settle in the middle – which is ok. By making them non-removable this will help them achieve the best of both worlds. That being decent and standard battery life and thinner phones. The HTC One S is the thinnest HTC device to date, and still manages to get excellent battery life thanks to the efficient Qualcomm S4 dual-core processor under the hood. So what they’ll produce next will probably be even better.

So it appears that HTC is retiring the plans for smartphones with bigger batteries in order to save space and keep things sleek. We here at Android Community love the new One series, available on T-Mobile next week and on AT&T with 4G LTE in early May. Would you still buy a ONE device if they were slightly fatter, say 2mm but came with 2500 mAh batteries?