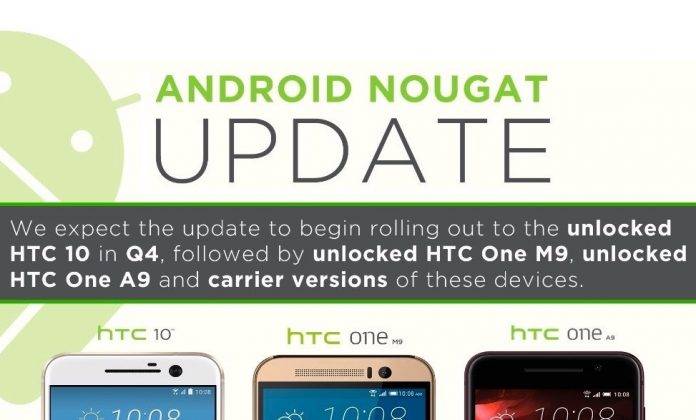 HTC has been eagerly announcing that its latest flagship phones namely the HTC 10, HTC One M9, and HTC One A9 are getting the Android 7.0 Nougat update. We’ve heard of this news twice already the past months and the Taiwan tech giant is once again confirming that the software version will be out for the phones mentioned. Now that Google is making the Android Nougat platform more public than ever, HTC is simply affirming that its phones are eligible for the chunky mobile OS.

The update is said to roll out to the carrier versions of the HTC One A9, HTC One M9, and HTC 10. Even the unlocked variants will also receive Android 7.0 sometime in the 4th quarter or just before 2016 ends. As if we won’t remember this detail, HTC keeps on telling the public about this good news. We’re guessing that it’s another way to market the latest Android phones and tell the world that they’re not forgotten.

Getting the latest update from HTC should be easy. The company will release it over-the-air (OTA) so just wait for it. Q3 is about to end so once Q4 starts, expect to receive the Nougat OS anytime soon.

If this is the case, then HTC may be breaking its promise that the next software update for the One A9 will come within 15 days of Nexus. This year’s Nexus phones aren’t the first Nougat devices but it’s the LG V20. We’re interested to know if HTC will still honor its word last 2015 when it comes to software updates.