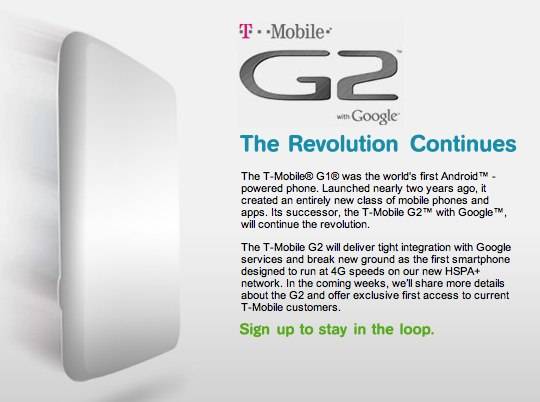 T-Mobile has launched a new teaser site for their latest Android smartphone, the T-Mobile G2 with Google.  The first HSPA+ capable smartphone to their network, details on the G2 are in short supply right now; only a vague outline of the handset has been shown, though we have heard various rumors about different T-Mobile devices in the past.

That includes the T-Mobile G1 Blaze (aka the HTC Vision), a slider-QWERTY handset made by HTC and that would certainly fit in with the carrier’s comments that the G2 is the “successor” of the original G1.  However, we’ve also heard talk of the T-Mobile myTouch HD, a large-screen version of the keyboard-free myTouch 3G.

Both are believed to be part of T-Mobile’s Project Emerald.  The carrier says it will release more information on the T-Mobiel G2 in the coming weeks, with existing subscribers getting early access to the Android handset.