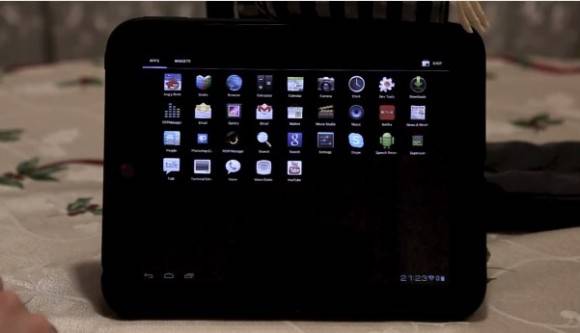 Everybody’ favorate cheap, hackable tablet still has considerable modder momentum behind it, and the CyanogenMod team is a big part of that. Now they’ve released a video of CyanogenMod 9 (Android 4.0 Ice Cream Sandwich) running on HP’s abandoned TouchPad hardware. The port isn’t complete yet, with a few hardware issues keeping it out of the hands of eager ROM flashers, but the developers say they’ll be releasing the ICS version along with CyanogenMod 9’s general debut soon.

The two primary problems with the TouchPad version of CyanogenMod 9 are the front-facing camera and video playback, neither of which are functional at the moment. The CyanogenMod team are noted perfectionists, and won’t release the code until all features are at least somewhat working. Other than those issues, the software seems quick and stable, even on the TouchPad’s relatively outdated hardware. Important and tricky functions like WiFi and Bluetooth seem to be working perfectly, and like previous versions of CyanogenMod on the TouchPad, a pre-boot environment lets you choose between Android and the native WebOS.

CM9 code is already available for modders of more established Android hardware, particularly the Nexus line and its close cousins. The “official” release of CyanogenMod 9 has yet to come, but it’s expected any day now. Not all phones will be immediately supported – it takes time to roll out the updates for the dozens of official ports. Tablets are becoming an increasing presence in the CyanogenMod community, with the Nook Color, HP TouchPad and soon the Galaxy Tab 10.1 joining the ranks of supported devices.

There’s no ETA for an official CM9 TouchPad download, but you can still use the Gingerbread-based CyanogenMod 7. Check out our video hands-on for a look at how well it runs.