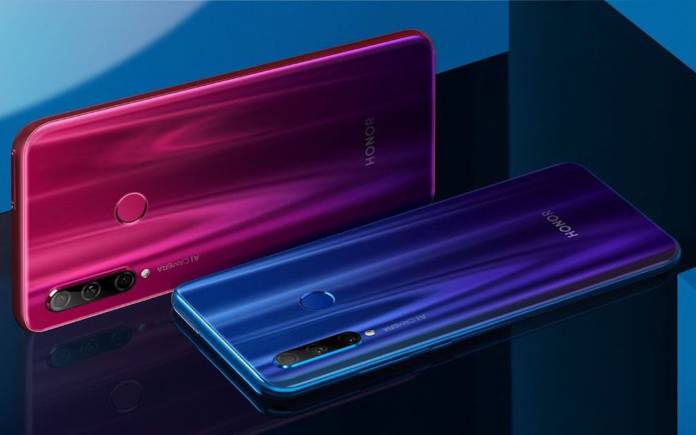 More phones are coming from Huawei. The top Chinese OEM , through its sub-brand Honor, is getting another addition in the form of the Honor 20i. There is no big announcement yet but the company is scheduled to launch the phone in China next week on the 17th. Only teasers have been seen including this set of images with a standard waterdrop notch screen and a 32MP selfie shooter. It looks like the usual Huawei phones we’ve seen in the past complete with the gradient color design.

These ore official images sighted on VMall. They give us an idea that the triple rear camera system is real. There’s also the rear-mounted fingerprint reader.

The rear side of the phone looks different from the Honor 20 earlier leaked because that one doesn’t have a fingerprint scanner at the back. It can be assumed it is embedded on the display.

While it’s different from the Honor 20, the Honor 20i appears more similar to the Honor 20 Lite also leaked. It could be one or the same.

Honor has put up the phone for reservation. It will debut next week together with the Honor MagicBook 2. Pre-orders will begin on the 15th, just a couple of days before the official reveal.

Vmall lists the smartphone with three color variants: Black, Red-Purple gradient, and Blue-Purple gradient. Specs may include the following: a 6.21-inch screen, waterdrop notch, FHD+ resolution, Kirin 710 SoC, 4GB or 6GB RAM, 64GB or 128GB onboard storage, microSD card slot for memory expansion, and a 3400mAh battery. The triple rear camera setup also features 24MP, 8MP, and 2MP cameras. Honor 20i runs on Android 9 Pie OS out of the box. Notice they are almost the same with the Honor 20 Lite’s features except for the battery capacity and the 6GB RAM option.