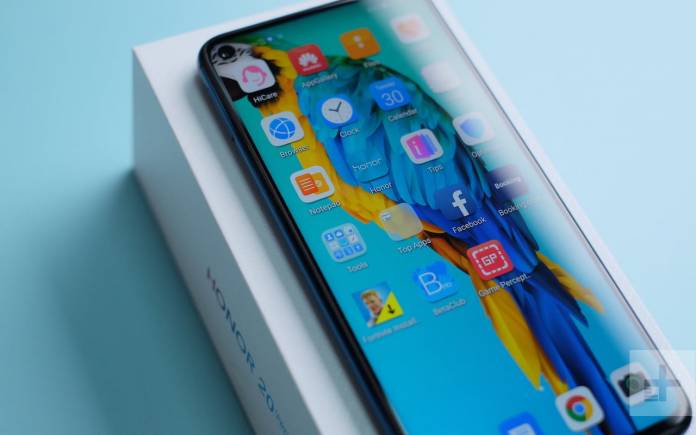 The first time we heard about the Honor 20 was earlier in March when specs and latest images surfaced on Weibo. It was expected to arrive with the Honor 20i with three color variants. The phones are set to launch very soon. There will also be the Honor 20 Pro so expect three phone models: the Honor 20, Honor 20i, and the Honor 20 Pro. Note that the Honor 20 is different from the Honor View 20. That one was launched before 2018 ended.

The Honor 20 series is a follow-up to the Honor 10 line. It is expected to launch beginning on May 21. That’s a couple of weeks from today.

The Honor 20 Pro will feature a punch-hole camera display where the selfie camera is placed. As with most phones that have such camera display design, you can choose from fun wallpapers that highlight the camera.

Honor 20’s display appears to be almost bezel-less but we still see a chin. On the left part is a SIM card tray. The design doesn’t look any different from previous Honor models but expect better specs and features.

The Honor 20 and Honor 20 Pro look more like the Huawei P30 Pro with the triple rear camera system and a camera bump on the upper left part of the rear panel. You can choose from the Blue, Pearl White, or Black color options. There may be a red version which will be the Moschino Special Edition.

The Honor 20 Pro may come with the same camera setup of the Huawei P30 Pro. Major features may include the following: 5x optical zoom, 10x hybrid zoom, time-of-flight (ToF) sensor, 48MP cam, 20MP secondary, and an 8MP third shooter. A fourth camera is also a possibility but we’re taking things with a grain of salt. At least one Honor 20 phone may have a quad camera setup, again, just like the Huawei P30 Pro.

Here are the specs we know so far: 6.1-inches, fingerprint sensor, 6GB or 8GB of RAM, 128GB or 256GB storage, 3650mAh battery, and a Kirin 980 processor. The Moschino Special Edition will include a Moschino box and Moschino case. Inside, a software theme will be running.

Aside from Moschino, there’s also the Honor 20i x AAPE Special Edition. Choose from the Pink and Blue camouflage versions.