Square Enix has a big gift for fans of the Hitman franchise today, at least for those who also favor playing the titles on their mobile devices. First up is an update to the diorama-esque Hitman GO title, adding a bit of nostalgia for those who have played the game’s Silent Assassin sequel. But more than that, there is finally the addition of cloud saves plus a temporary price drop to celebrate the update. There’s even some good news about the more Hitman-like Sniper title coming soon.

Continuing its tradition of bringing memorable locations from its bigger titles, like the “The Opera” from Hitman Blood Money, Square Enix is bringing Hitman 2 Silent Assassin’s iconic St. Petersburg map to Hitman GO as the latest mission box. And by “box”, they do almost literally mean a box, because, if you have forgotten, Hitman GO plays out more like a board game set in a cardboard diorama world. This new box brings 8 new levels set in Varosnij Square. As before, to access this new box for free, you need to have completed at least 140 missions. Otherwise, you can also cough up $0.99 to buy the new levels if you’re in a hurry. 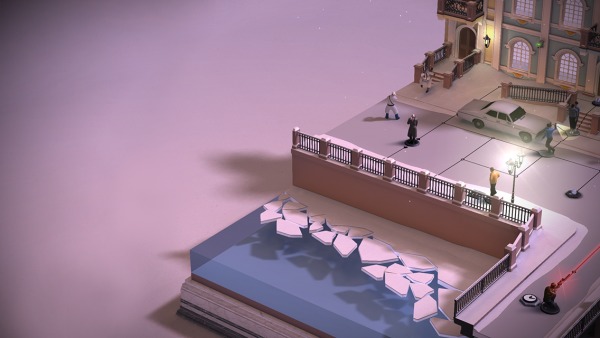 The update also finally ropes in cloud saving, meaning your save games can now be stored on the Internet, meaning you can pick up where you left off, no matter what device you’re on. And that bit might be even more useful now since Square Enix is releasing the update on both Android and iOS at the same time. To celebrate this expansion, Hitman GO’s prices will be taken down a notch, now available for only $1.99. There’s very little time to deliberate the matter though, as it will only last until the 29th of October.

Square Enix is also teasing that their other mobile Hitman game will be launching soon. How soon? They’re not exactly saying. Unlike Hitman GO, Hitman: Sniper returns to the roots of the franchise and is billed as a “competitive sniping game.” That said, based on early sneak peeks, it won’t be a faithful rendition of a full Hitman game either. It will instead be like a “vertical slice” of a Hitman title, focusing on short mission-based bursts that seem to be the trend of many mobile games these days.