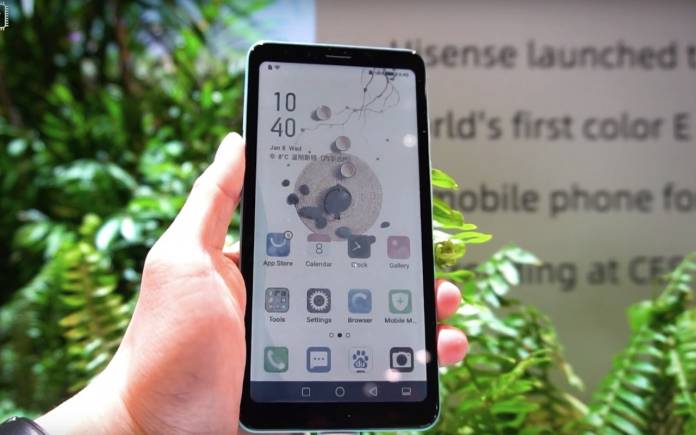 Last week, we shared with you that HiSense has been working on color e-ink screens that may reduce eye strain. It was shown off at the CES 2020 in Las Vegas. We stumbled upon a demo video on YouTube, showing off the color-ink screen in action on an unknown HiSense phone. In case you’ve been living under a rock, HiSense also sells smartphones although not as prolific as other OEMs. We know HiSense more for its TVs and displays and even Chromebooks.

It doesn’t matter what model is it at this point because HiSense is simply showcasing the color e-ink. It’s an e-ink display with colors which is different from the usual black-white e-ink found on most e-readers. With this color e-ink, the display looks like an old LCD. It appears to be washed out but we think that’s fine for an entry-level that we believe will be very affordable.

This smartphone has been designed to be an e-reader as well. It’s not a hi-res screen because the e-ink is meant to save power. It really is very basic with basic features like a single rear camera, Qualcomm Snapdragon 430 processor, 4GB RAM, and only 32GB onboard storage.

The HiSense smartphone with color e-ink display doesn’t feature blue light so it’s safer for reading at night like the old LCD screens from years ago. As we mentioned before, it can reduce eye strain. The color e-ink technology is relatively new but we think it will be useful. It can be used not only on smartphones but also on other smart devices.