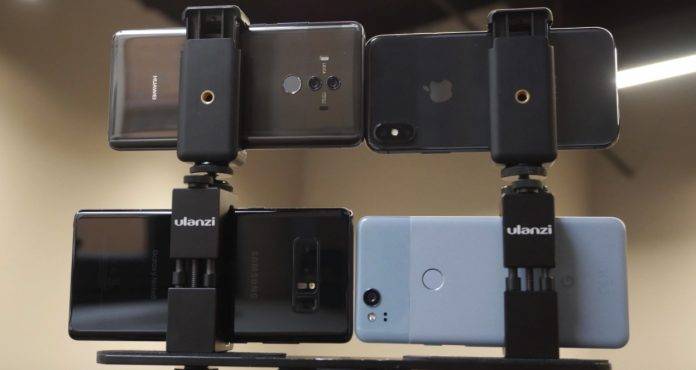 Just the other day, we told you about the Galaxy Note 8 scoring high in OIS video recording. We were impressed with the Note 8 as it aced the stabilization test, as well as, the LTE test. Compared to the Google Pixel 2, Huawei Mate 10 Pro, and the iPhone X, the Samsung Galaxy Note 8 does have the best OIS. Naturally, Evan Rodgers, the guy who did the comparison video, received a lot of questions about the test.

Rodgers attempted to make things clearer by showing off a 4K version:

The video has been synchronized already. Some people commented those were not natural vibrations but vibrations of the train. He placed the phones on a tripod. The walking stabilization tests showed more natural vibrations. For that round, the Pixel 2 won.

The guy showed off how he mounted all four phones. In case you’ve been wondering, see image above.

The setup may have caused the phones on top to have worse vibrations compared to those at the bottom but the rig was secure very tightly. Rodgers noted that his main goal really was to show the world how good the Note 8 is at machine vibration stabilization, just in case you are wondering.

As for the woman in the video, we still have no idea who she is.