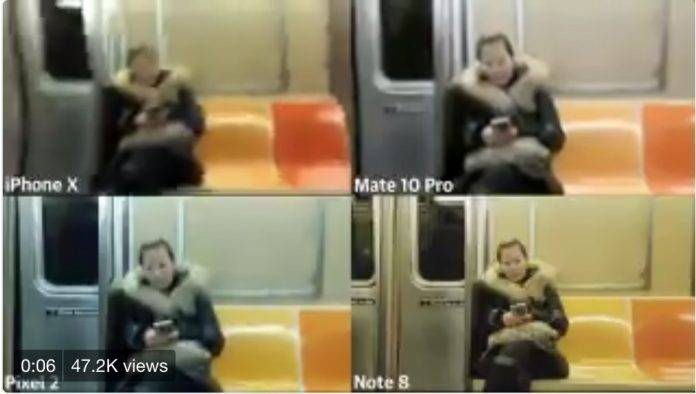 Samsung can now breathe a sigh of relief as there are no reports of Galaxy Notes catching on fire. In fact, the reviews for their newest Galaxy Note 8 have been pretty great. Now that the phablet has more or less been in the market for a few months, users continue to test it out in comparison to other flagships from competitors. The two latest ones were testing out the OIS or optical image stabilizer while taking a video while another one tested its LTE band performance in North America. And sure enough, the Note 8 aced both tests.

YouTuber Evan Rodgers conducted a stabilization test on four flagship devices that have the best cameras around: iPhone X, Huawei Mate 10 Pro, Google Pixel 2, and the Samsung Galaxy Note 8. He tested the OIS on all phones, which is supposed to prevent camera shake, especially when taking videos. The first part showed him entering a subway entrance while taking videos on all four phones. It looked like all four were pretty stable. But when he posted another video on Twitter when he actually rode a train with all its movements and vibrations, that’s when the Note 8 really shown and as he said, “eating some kind of vibrations for lunch”.

so one thing I couldn't make space for in my camera piece is this little comparison here. The note 8 eats some kinds of vibrations for lunch pic.twitter.com/dhPt22aiOq

Meanwhile, test data from Cellular Insights show that when it comes to LTE performance, at least in North America, the Galaxy Note 8 and the Google Pixel 2 (and even the LG V30) are way ahead of its competitor, the iPhone X. In fact, they get double the speeds per channel compared to Apple’s newest toy. The report said this is due to the added antenna diversity which helps in extracting and processing a cleaner signal.

As early as September, the Galaxy Note 8 was already breaking records for Samsung (and not catching on fire!). Pre-orders were at an all-time high and when it finally hit the market, people were generally happy with it. Let’s see if the sales figures will match up when Samsung finally releases them.