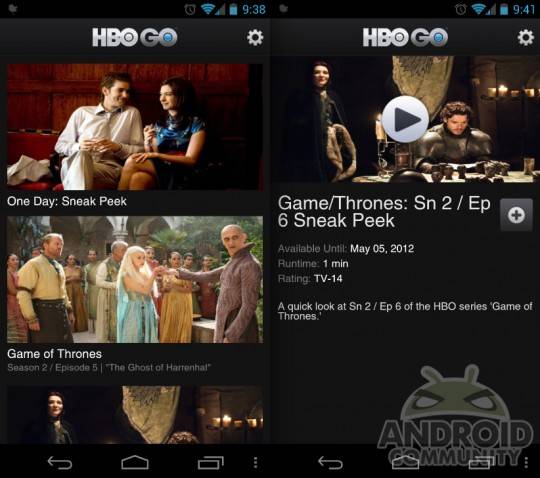 So last week HBO updated their popular HBO GO and MAX GO Android applications with support for Android 4.0 Ice Cream Sandwich devices. While this was a much awaited and needed update it sadly didn’t fix many users problem — and that is no Android tablet support. After we reached out to HBO we received a quick statement confirming a tablet version will be coming very shortly.

With HBO GO you can watch all those awesome TV series like Game of Thrones, True Blood, Entourage and more all from your Android powered device. Until now my Galaxy Nexus and all ICS devices weren’t supported and couldn’t be used but now they all can. When I saw ICS support I thought that would naturally include tablet since that is what Android 4.0 ICS is, a tablet and phone user interface. After reaching out to HBO here’s what they told us:

According to Laura from HBO we can expect the tablet-optimized application to be available sometime early this summer. Hopefully that means within the next 2 months as I’d love to stream Entourage on my Verizon Galaxy Tab 7.7 LTE while traveling this summer. For now you can get the new and improved smartphone version by hitting the link below.