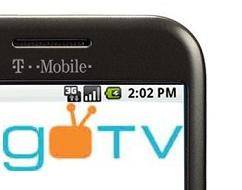 The client is one of a number of streaming media apps to hit the G1, with FlyCast and Last.fm already offering audio entertainment on-demand.  Meanwhile there’s still talk of Sling Media offering a custom Android client for their TV place-shifting technology.

GoTV is already available for iPhone, Virgin Mobile, Verizon Wireless, Sprint and T-Mobile users, either via download clients or specific web portals.  You can find the GoTV Networks app in the Android Market, where it’s a free download.

GoTV’s channels are available to users for free via a downloadable application accessed from the Google Android Market. There were over 130,000 downloads of GoTV’s channels through December 31st, 2008. The user base continues to grow and GoTV projects approximately 250,000 user downloads by the end of Q1 2009.

“GoTV is the first mobile media network to offer such a wide and deep entertainment channel offering to users of Android-powered handsets,” said Thomas Ellsworth, Chief Executive Officer of GoTV Networks. “We are extremely pleased by the initial demand for our products among G1 users. We look forward to the strong future growth of Android-powered handsets that will be fueled by the introduction of new products from Motorola, HTC and others.”

GoTV Networks (www.gotvnetworks.com) is the premier mobile media network and mobile media services provider in the United States. GoTV’s studio (GoTV Productions) produces original and syndicated partner programming through the company’s mobile and broadband technologies to the widest distribution network in the US. GoTV’s content is accessible to mobile users in streaming and on-demand formats on a broad range of wireless devices through the Apple iPhone Application Store, AT&T, Boost Mobile, the Google Android Market, Sprint (including Nextel), T-Mobile, Verizon Wireless (including Alltel) and Virgin Mobile. Online access is available from multiple video websites and portals. The company is headquartered in Sherman Oaks, California with regional offices in Seattle, Kansas City and Atlanta.